Yes, Aiken Bluegrass Festival contained all of those elements in abundance last weekend, May 11-12 in Aiken, South Carolina, but this festival was really about artists taking chances with each other, pushing the envelope to create unique musical experiences for the greater good. Proceeds benefit local causes such as Great Oak Therapeutic Riding Center and the Albrecht SPCA. I’d like to take you back to some of those creative chances taken, memories that were anything but ordinary…

Those sunny skies turned dark for only an hour on Saturday afternoon, as fat raindrops and even hail came spewing out of a singular, ominous cloud that parked over the fairgrounds during the highly anticipated set by Greg Burns & Friends. When the beloved production manager of Greensky Bluegrass took the stage with a bass in his hands, he was joined by Billy Strings on electric guitar, Dave Bruzza on the drum kit, Anders Beck playing dobro, and the amicable Matt Rowland (aka Mr. Jimmy) on keys. It was a sight to behold, as festival director Christian Schaumann and a few others held up a rain-tarp to keep Rowland and his rig dry for the entire set. The ad-hoc band was up there to have as much fun as possible, and for those of us that braved the micro-storm, this resulted in joyful renditions of Skynyrd’s “The Ballad of Curtis Loew,” Greensky’s “Letter to Seymour,” as well as a couple of Hartford tunes, “I’m Still Here,” and “Vamp in the Middle.” The latter featured the fiddle playing of Zebulon Bowles (Hot Buttered Rum), who could be found sitting in for a few different sets over the weekend. The high-point of this set was a raucous cover of Chuck Berry’s “Johnny B. Goode,” as Strings’ vocal energy brought to mind a young Bob Weir, building momentum until the fans below and skies above were absolutely losing it. Lindsay Lou helped bring it home with Led Zeppelin’s “Good Times, Bad Times,” an apt closer to this rock ‘n’ roll rager of a show. The stage’s emcee came out repeating an adapted chorus of the Berry rocker, “Go Billy, Go! Go!” as if reading the minds of everyone in attendance.

This is the kind of moment that you come to Aiken Bluegrass Festival for, the completely unique musical scenarios that just invite magic to happen. It starts with deep roots, as the festival’s organizers and staff have strong relationships with artists and patrons which allows a high level of creative trust. As Fruition’s Mimi Naja puts it, “the artists are in love with each other,” which succinctly describes the communal meetings of hearts and strings happening in Steve’s Beer Hall on each night of the weekend. Named after the late ABF founder Steve Groat, Steve’s Beer Hall was a well-received new venue this year, adding an indoor, air-conditioned option for about half of the shows. This was a great respite from the scorching sun during the day, and come nightfall, home to some of the defining moments of the festival.

Leftover Salmon headlined the mainstage with a robust, fully psychedelic set of slamgrass, complete with a Sockeye jam (side trio with Erik Deutsch, Alwyn Robinson, Greg Garrison), and guest appearances by Jay Starling and Billy Strings. After minds had been sufficiently melted, the Aiken family made their way inside for Vince Herman’s Leftover Jam.

The palpable spark that comes from old friends sharing the stage is one that instantly ignites everyone in the room. Such a spark was burning bright in Steve’s Beer Hall on Friday night, as Vince’s jam included members of Salmon as well as a trio of fiddlers, Zeb Bowles, Jake Simpson (The Lil Smokies) and Lyndsay Pruett (Jon Stickley Trio), the latter’s father, Steve Pruett (Grass is Dead), Brad Parsons, Billy Gilmore, Jon Stickley, Billy Strings, The Lil Smokies, Lindsay Lou and more. Stickley and Thorn were back to their old ways, and Strings was eating it up and jumping in for more on the improvisational jams. The Smokies went all in on a jam within “Why You Been Gone So Long?” before the unmistakable beat of “Samson & Delilah” really got everyone on the same page. Vince sent up the beacon, “If ya got something, come up and play it!” and 14 pickers and singers crowded the stage for one last song. Lindsay Lou’s brimming voice was the spiritual focal point of “Sittin’ On Top of the World,” a communally enjoyed standard that had the room overflowing with delight.

Saturday was a full day, with the aforementioned Greg Burns & Friends show, a burning hot Lil’ Smokies set, lightning fast Larry Keel, Lindsay Lou wowed the crowd with a little help from her friend, Strings, and of course Greensky Bluegrass rocked the main stage to an impressive crowd. Once again though, the coveted performance of the evening was late-night in Steve’s Beer Hall with the never-before-seen Billy Strings’ Psychedelic Circus. This is the kind of set that Billy and his band were born to play, both acoustic and electric, with a range of sound that transcended time or any specific branches of music. The show listened like an alternative history of American music, starting with New Riders’ “Lonesome L.A. Cowboy” and including everything from old bluegrass tunes like Flatt & Scruggs’ “Georgia Mail” to the Hendrix classic “Hey Joe.” Keel, the acclaimed “Mayor of ABF,” donned a flashy gold jacket as him and Billy became the center of attention in Hey Joe, playing mere centimeters from each other in a furious, free-wheeling tribute to the guitar legend. Billy has mastered his organic performing energy, becoming the unquestionable focal point of any stage he steps foot on, eagerly willing the audience onto his level. Even while leading artists that he probably looks up to for influence, this was definitely Billy’s circus, and every single one of us was lucky to be in the building. 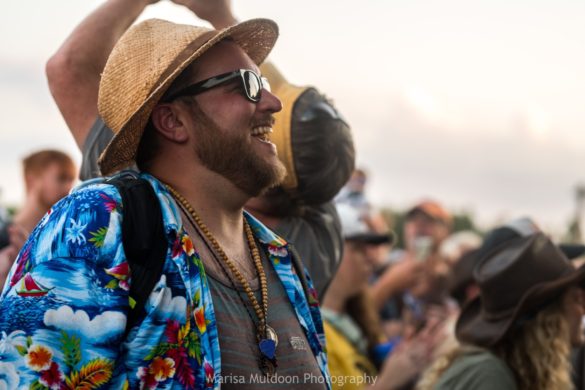 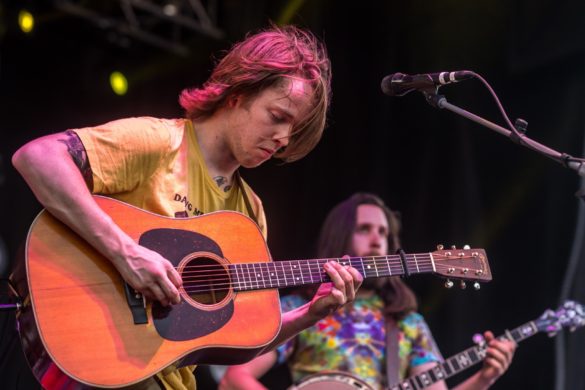 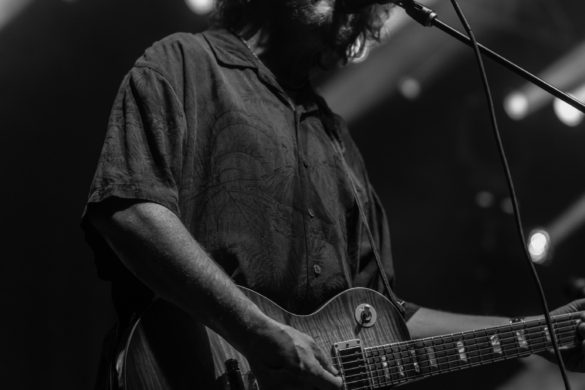 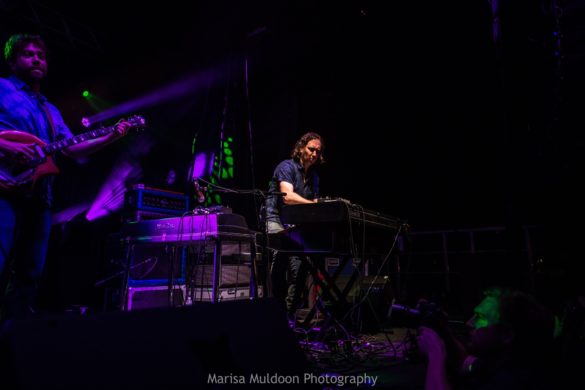 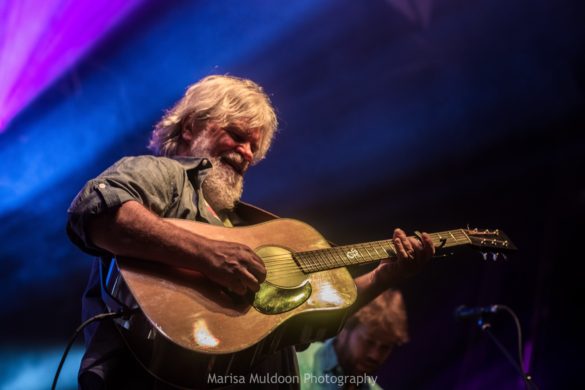 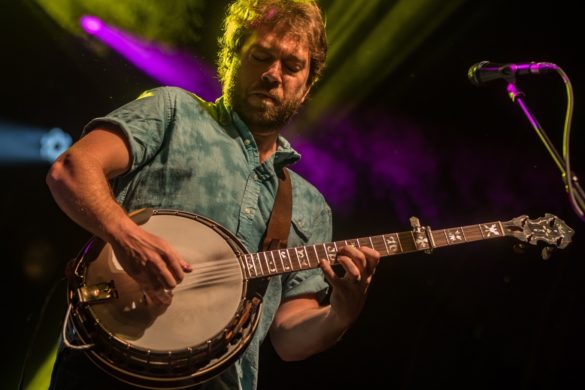 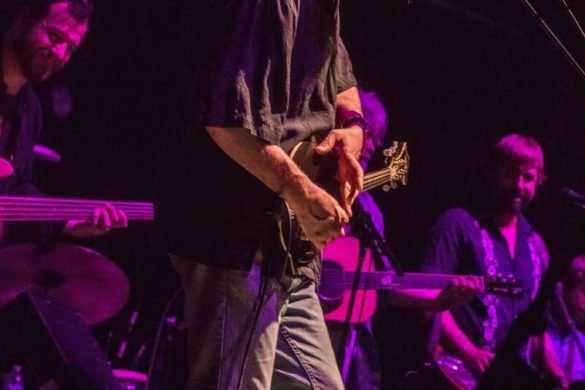 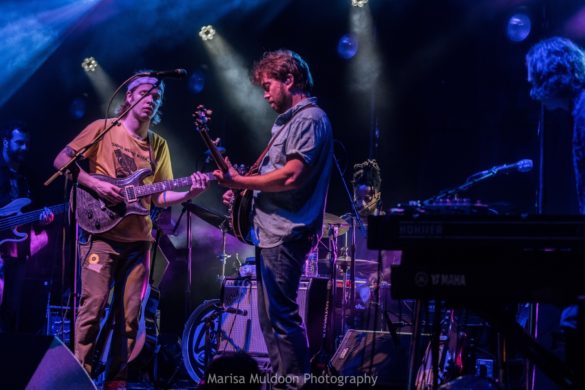 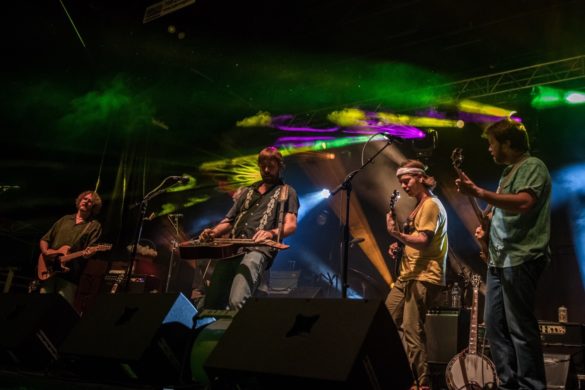 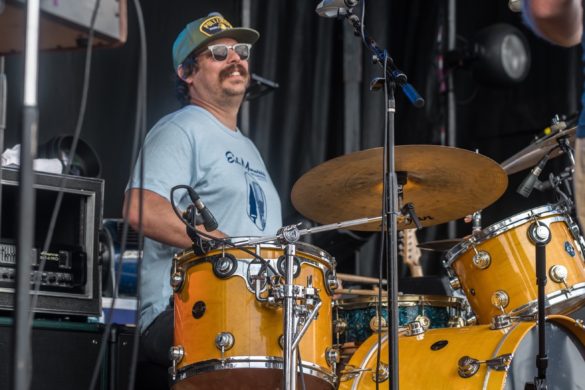 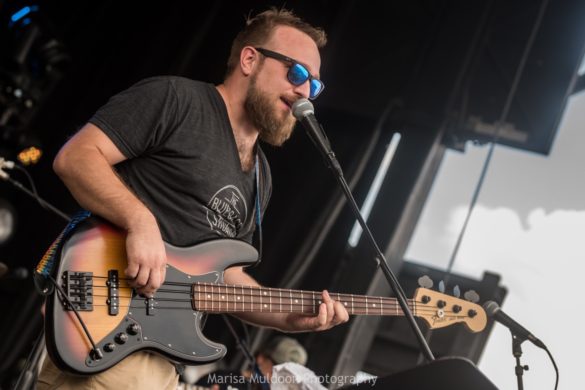 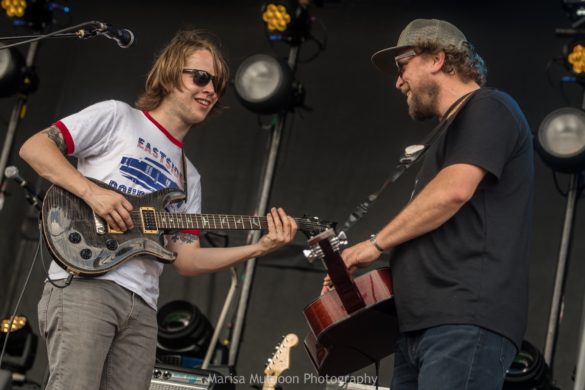 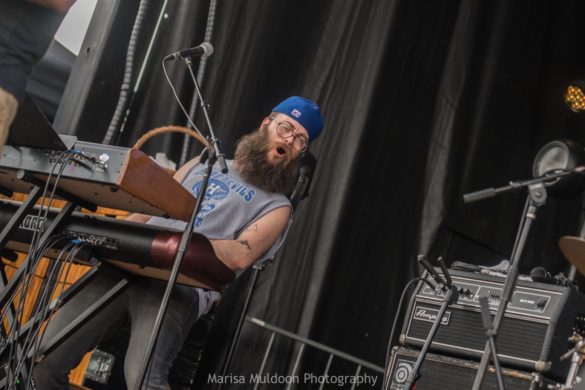 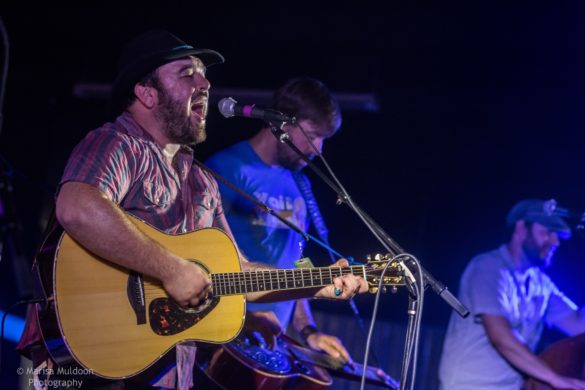 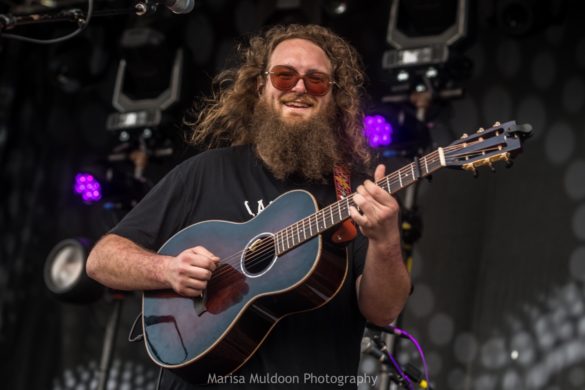 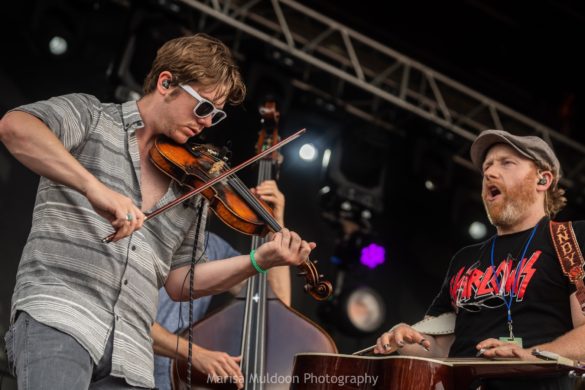 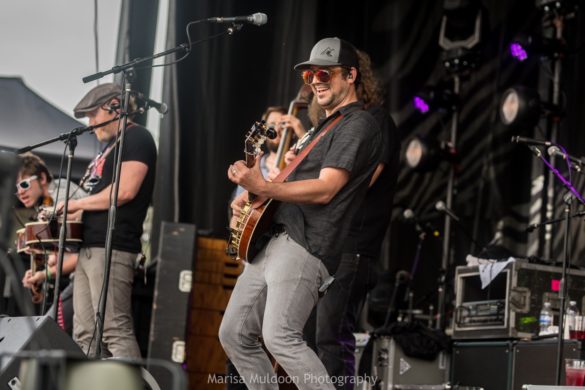 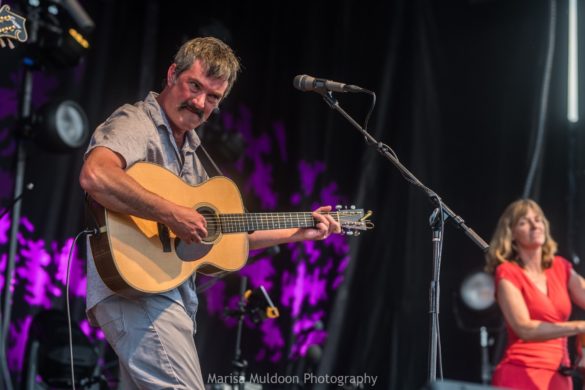 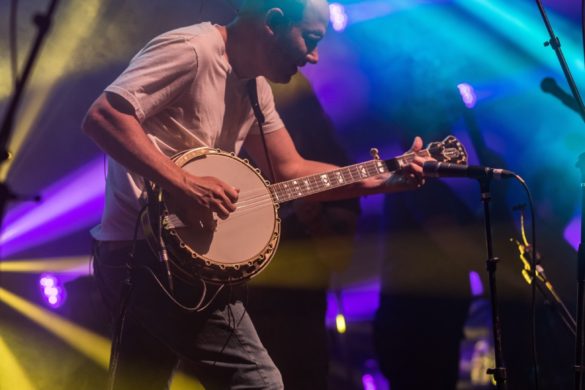 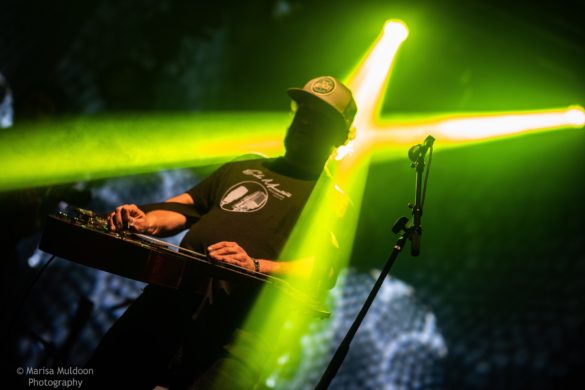 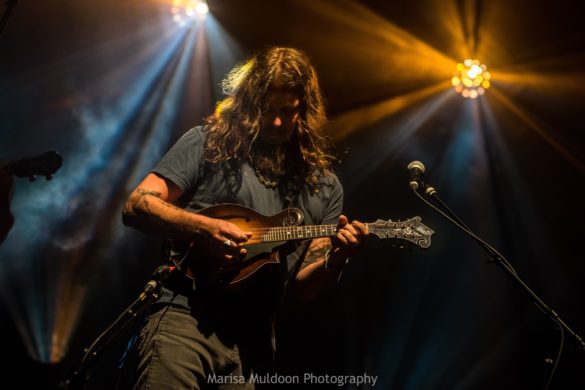 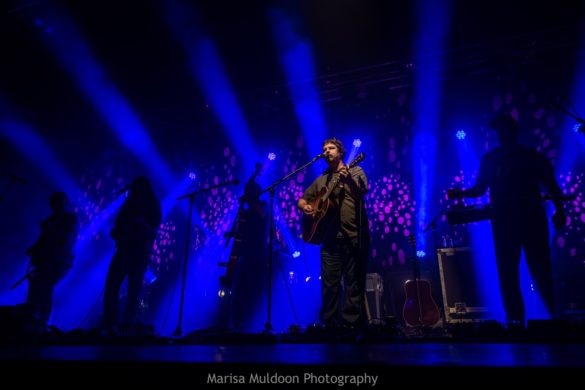 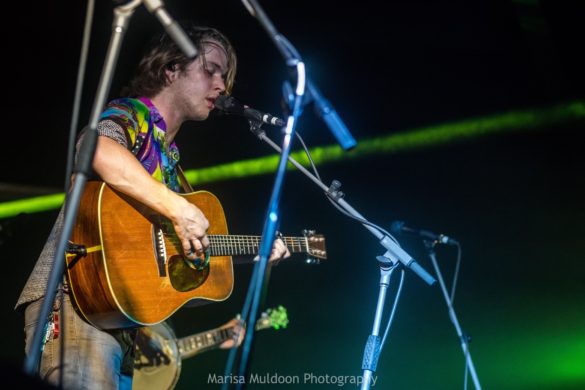