Waking Windows returned to Portland last weekend for its now annual music event there, on Friday September 29 and Saturday September 30. For two nights the already colorful southern Maine music hub buzzed louder and brighter with comedy, literary readings, art, and a slew of the coolest locally and nationally touring bands and artists.

On the musical side of things, Friday evening packed out the venues of Bayside Bowl, Food Fork Lab and The Apohadion Theatre. Charming the intimate space of The Apohadion were groups like Jagweed, Loone, legendary troubadour Ed Askew and his band, and, a definite Friday night highlight, solo performer Peter Broderick. Broderick could most likely freeze any room into breathless awe with his talent, which he did at this show. As the previous artist just finished leaving the stage, Broderick opened with a traditional Irish tune, “As I Roved On,” from within the middle of the crowd, eventually making his way to a grand piano and completing the gorgeous first number there. That might sound like some cute parlor trick, but it’s actually an example of the many little nuances that help make Waking Windows events the brilliantly unique experiences they are.

Friday night finished in total rage mode, closing out with the one and only Rough Francis at Bayside Bowl (which happens to be one of the niftiest venues ever). To a crowd spilling out into Bayside Bowl’s upper hallway, the Burlington-born punk rock quartet put on a diabolically energized show, due in two parts to their charismatic lead singer on the one hand, and their air-tight trio of tight bass, guitar, and drums on the other. With a set combining room-wide choruses, mosh pits, and songs telling off Nazis, it was one of those special shows where one couldn’t make out whether the band or crowd was raging harder.

Day two of Waking Windows Portland brought the festivities to Congress St, the Champ Elysees of Portland, where different bands and other acts performed across fourteen different venues. Some of this happened at cozy outdoor spots like Congress Square Park and Tandem Coffee House, the second of which had a sidewalk stage set up for bands to play for audiences gathered around the place’s picturesque quarters. Opening up the day here were the spirited American-prided folk-punk group The Yawpers, who certainly got everybody’s motors churning for the day. At the front is lead singer and guitarist Nate Cook, who blew back the audience with his vicious yet tender scowl of a voice, and behind him are a guitarist and drummer cranking away on jaggedly caustic, solo-fraught rock-n-roll songs. One Longfellow Square, just down the block, had its collaboration game on point: Ed Askew performed again, but this time with the support of Italian pop-rock orchestra Tredici Bacci, while The Maine Youth Rock Orchestra also shared the stage with both Jimmy Dority and then indie folk rockers The Shook Twins. This latter set was something truly amazing, as the orchestra provided a nice extra-on to what is already some incredible songwriting from The Shook Twins. Using an array of cool instruments (like a gold-sheathed, voice-effecting payphone), the Twins’ music blended pristine vocal harmonies into sophisticated tunes that hit everything from alternative rock to what they themselves rightly dubbed “disco folk.”

Empire, a classy upstairs performance club, first showcased a number of clever and well-received comedians in the afternoon, like Greg Barris, who offered one dryly-witty send up after another for the city-local crowd, and had the room coaxed into hilarity with his interactive style of stand-up. Then, at night, the venue exploded in excitement with back to back sets from No BS Brass Band, O’Death, and then up and coming hip-hop star Open Mike Eagle closing out the night there.

No BS Brass Band, a mini army of funk consisting of twelve horn players and one insane drummer, came out swinging hard, and revved up the packed club gloriously. While the band laid down some dynamite covers of Led Zeppelin’s “The Ocean,” Michael Jackson’s “Pretty Young Thing,” and A-ha’s “Take On Me,” highest received from the band was an original: a multi-song movement inspired by Kung Fu movies that blended gothic-esque singing with wild composition and ecstatic, jazzy solos. Right after this, first-timers to an O’Death show might have wondered how a stringband could capitalize on that funky energy, but any and all doubts were assuaged quickly. O’Death absolutely rocked the house with their just as equally amped up playing.

Waking Windows in its last few hours had some serious overlap, but that’s more or less a dignified inevitable when your lineup just has too many cool artists on it. Ava Luna blasted out One Longfellow with soulful arthouse rock, while majorly popular folk artist Marissa Nadler wooed an enraptured audience in the intimate venue Blue. Like so many other performers at the festival, Nadler steeled hearts over with an uncannily beautiful, emotional singing voice, but also uniquely paired it with some jazz-minded guitar playing that doubled the respect from the room. Nadler had the place on their feet with an awesome closing cover of Black Sabbath’s “Solitude.” Just a bit later, And The Kids brought the roof of Space Gallery down with a passionately charged, terrifically played set of music. A truly powerhouse trio of guitarist, bassist and drummer, all also vocalists, And The Kids is a gem of a band, whose genre is difficult to pinpoint. But what impacts immediately and long after is their incredible songwriting, and how it intensifies greatly between their cohesive live playing. The trio wrapped up Waking Windows Portland in great style, by bringing up to sing on the last song members from Hammydown, another Waking Windows performing artist and also a tourmate of And The Kids.

If you ever spend in the Burlington, VT area, specifically the way cool town of Winooski, the promoters behind Waking Windows, which go by the same name, throw musical and artistic events of this caliber all the time around town. But when these special weekend extravaganzas happen, they’re not something to miss. 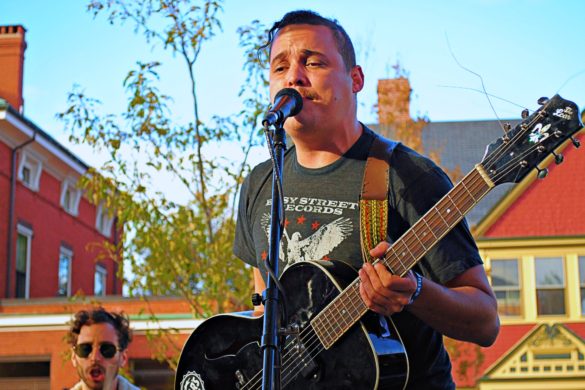 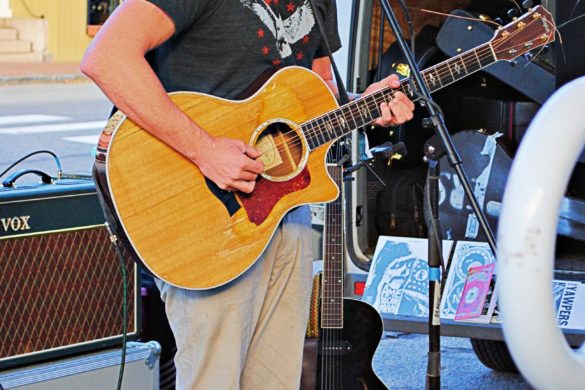 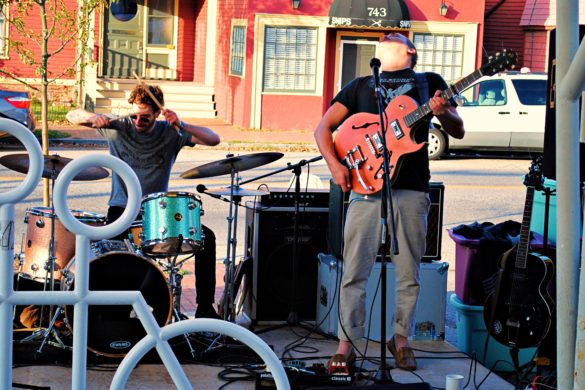 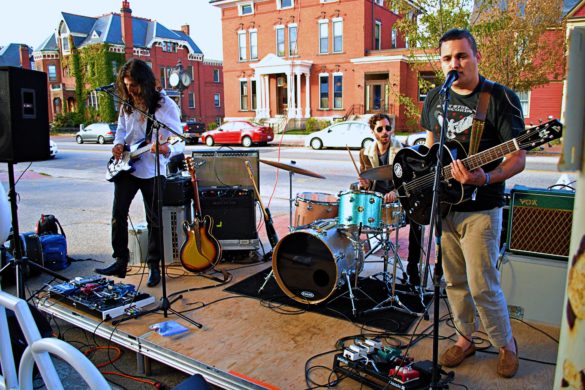 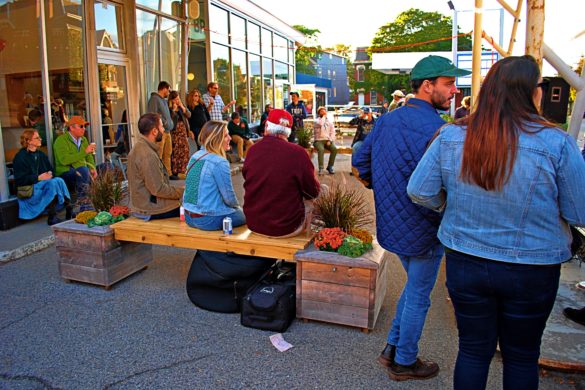 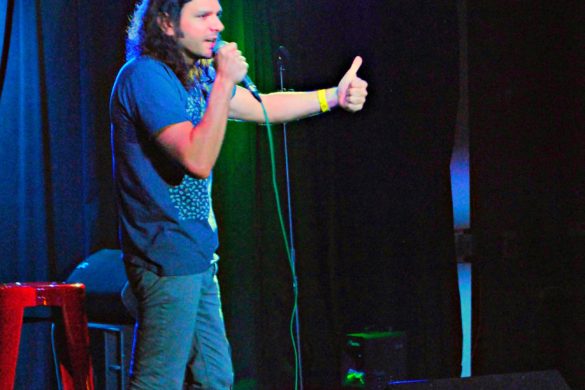 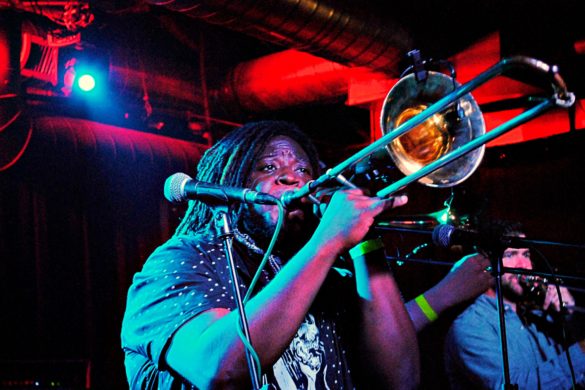 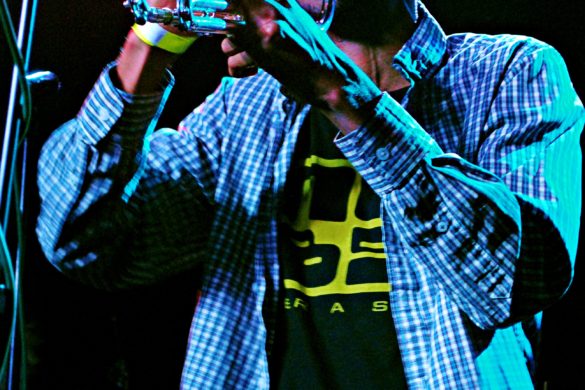 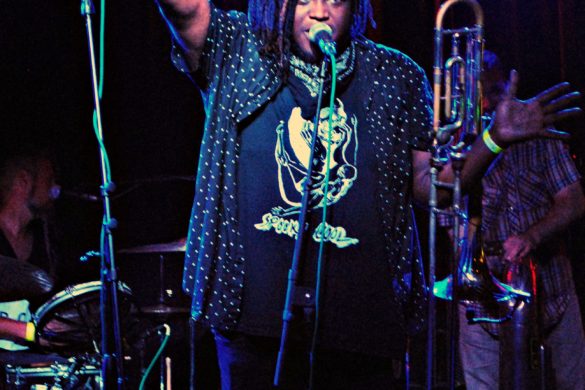 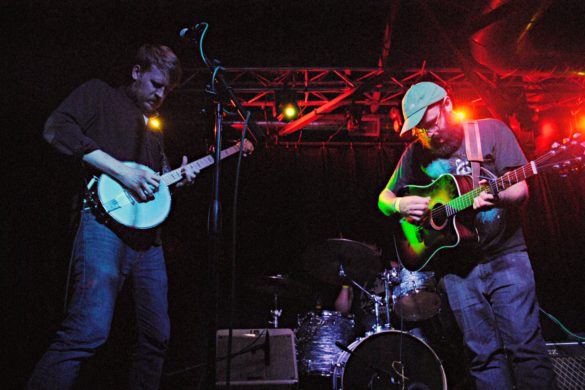 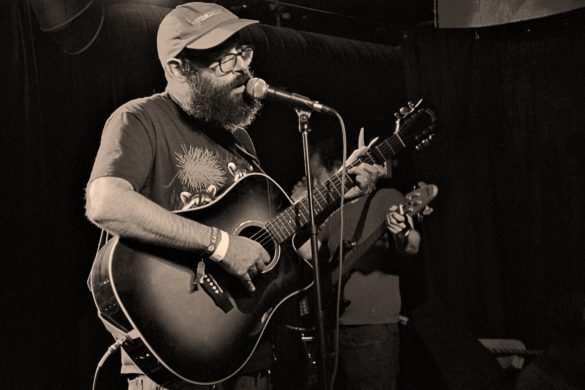 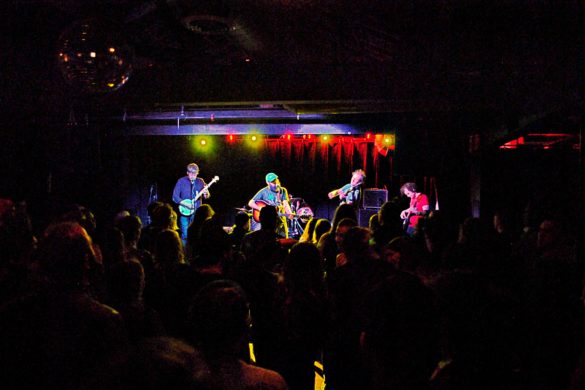 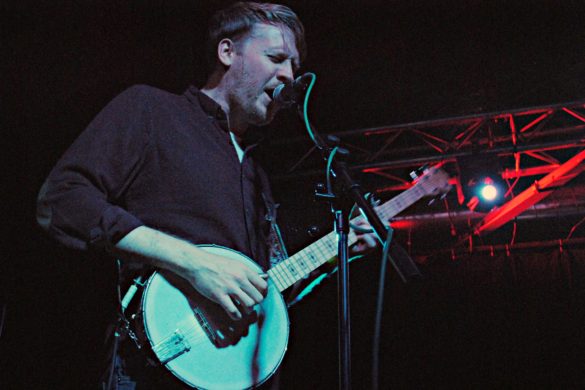 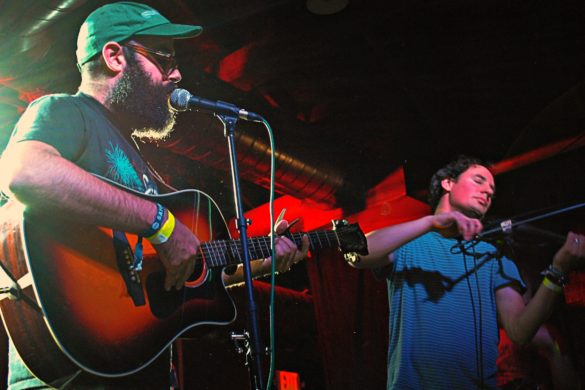 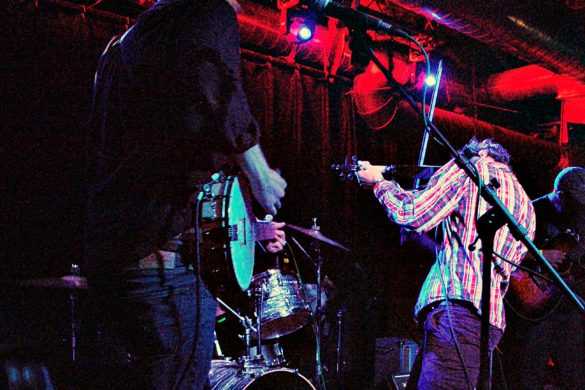 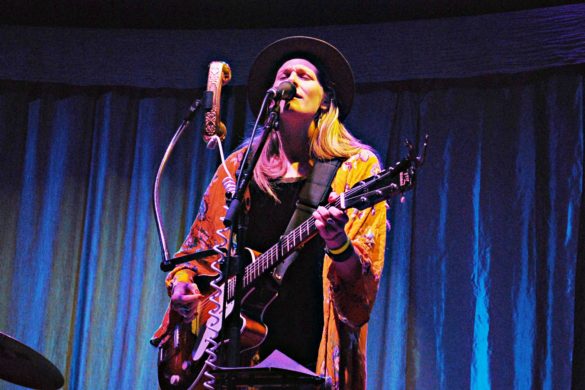 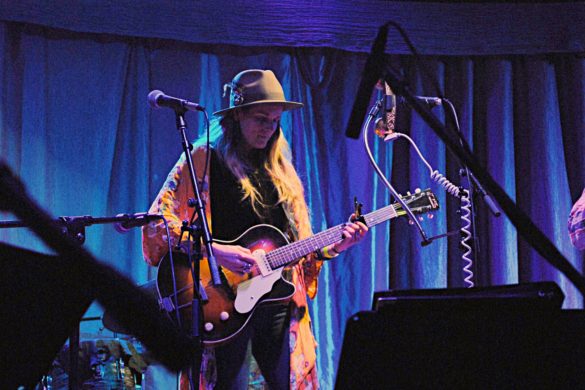 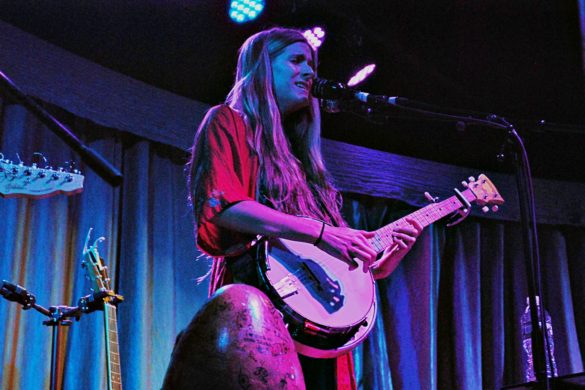 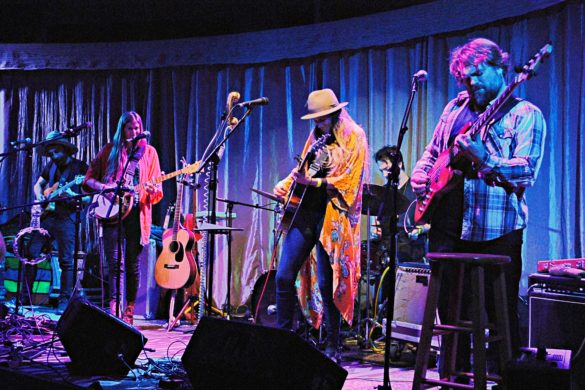 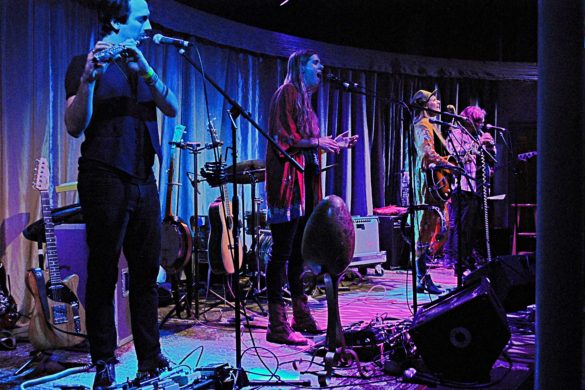 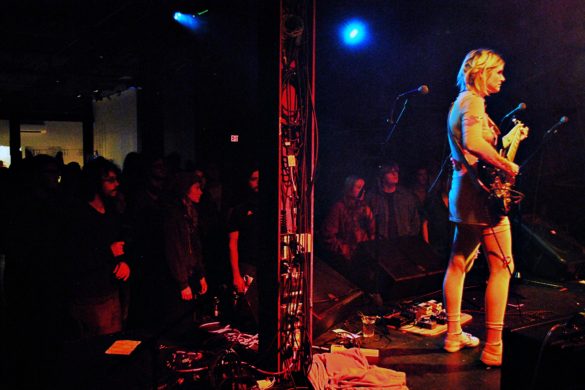 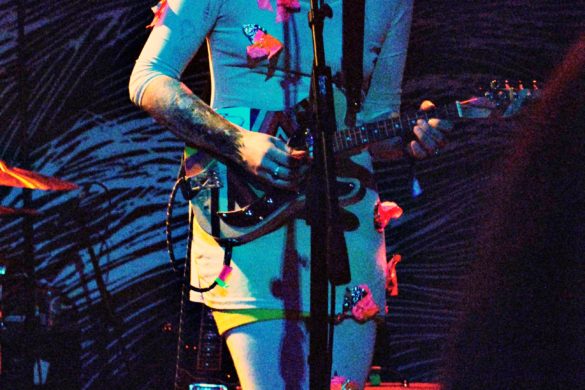 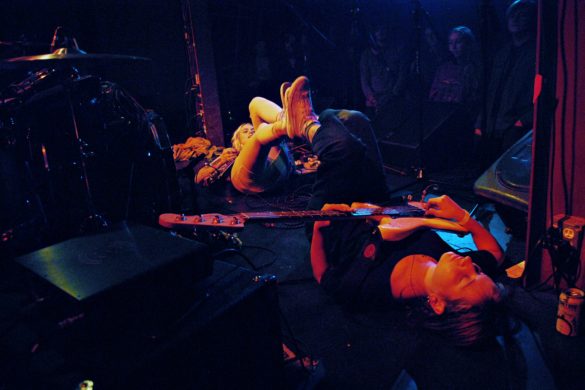 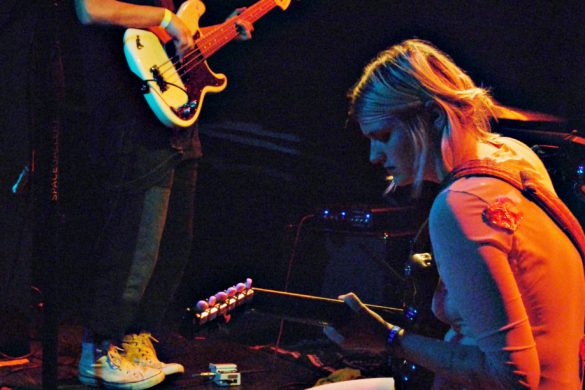 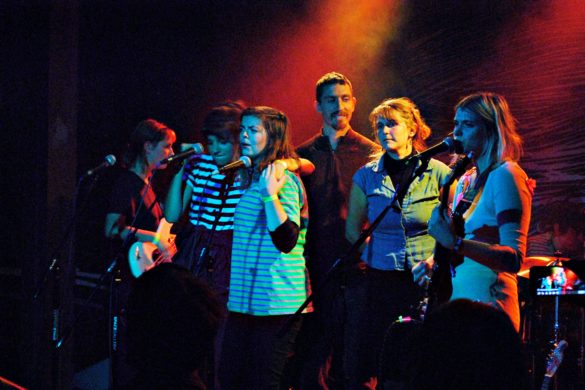 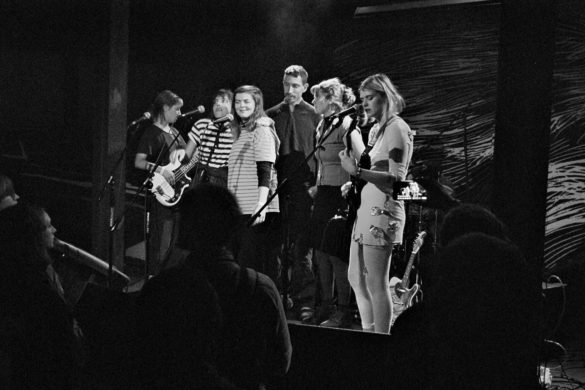 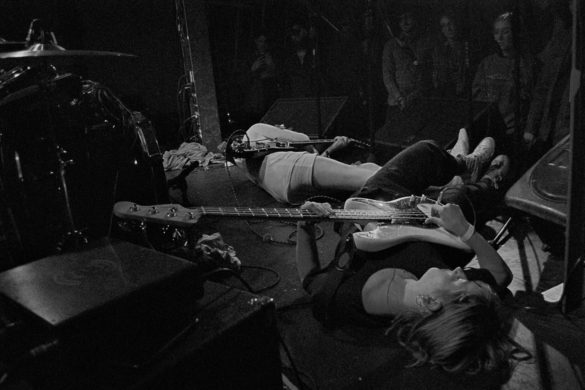