With more and more music festivals on the rise each year, there is a new trend happening amongst the scene, the emergence of hybrid festivals. No longer is it just the music and the visual arts that bring fans together. When talking about sensory aural pleasures, there is one thing that complements good music and dancing, and that has to be food. Blues and BBQ festivals, Beer and Cheese Festivals (check out Highland Brewing Company later in the year for this combo), and now the food truck festival that was last weekend’sOskar Blues in Brevard, North Carolina provided us with this sublime experience on Saturday, April 15, with their Loaded Up and Truckin’ Food Truck-Off and Aural Pleasure Fest, put on by Oskar Blues. Western North Carolina has now seen a culinary burst in restaurants on wheels. They express a unique love for the culinary arts and range from BBQ to Thai to Mediterranean, and the godfather of food trucks, the taco truck. This gathering in particular allowed attendees to indulge in culinary delights all day and boogie all night, a beautiful balance of sensory pleasures.

Our friends at Oskar Blues Brewery have relocated themselves in the picturesque town of Brevard, outside of Asheville. After the brewery was built, it became obvious that this area was perfect for concerts and festival gatherings, and led to them purchasing the REEB Ranch, just four miles from the brewery, for these type of events. The brewery is home to their very own food truck known as the CHUBwagon. As more and more food trucks came to the area they began to enact a rotating food truck schedule, bringing in new flavors for those that visited the brewery. The next step had to be a “truck-off” built around a music festival. This year’s second annual Loaded up and Truckin’ had it all, from an amazing lineup of musical artist and  21 of the areas best food trucks.  Attendees were allowed, for an extra fee, to become foodies for a day and judge each truck. The judge ticket came with a free taste from each truck, and the chance to crown the winner with a sizable donation from the festival.

The festival kicked off with the grand opening of the food trucks. As foodies and judges rolled into the ranch, they began their feast to the funky tunes of Electric Soul Pandemic, arguably the best background music for munching. The scene was a spectacle of good times, with the shining sun, and that cool mountain breeze, nobody could have asked for a more perfect day. The field took the shape of a horse shoe, funneling fans towards the stage but completely encompassing the field with all 21 food trucks (and a school bus turned food bus) as well as the Oskar Blues Brew Tent.  Any direction attendees walked in they could find delicious and unique food. The first half of the festival was all about food, while the music acted as more of a background condiment to enhance the experience.

Next on stage were Asheville favorites, The Fly By Night Rounders. Roaming downtown Asheville, there’s always a good chance of running into one of their sidewalk jams that tend to form large crowds. This trio focused on old songs about searching for gold in the mountains, ramblin’ and gamblin’, and some good old yodeling tunes. Possibly the most impressive artist of the weekend was Abby the Spoon Lady. One of the few professional spoon players in the world, she drove the rhythm with her in-sync spoon and bell percussion, moving in a fluid and almost choreographed motion. Their show concluded with the announcement that judging was ending soon, so get your grub while you can.

Sarah Siskind and SUNLINER came on next with a special birthday set proclaiming, “There aren’t many places I’d rather be on my birthday.”  Taking the stage solo at first with a soulful blues song called “One Day at a Time”, she then invited her husband on stage to pick up the bass, and a special surprise guest for procession, rhythm master Jeff Sipe.  Their set continued with a series of songs written by Sarah that held a theme of love and heartbreak, as her husband told the crowd “We’re really gonna stick one in the ribs,” with each song.

Announcements of the winning food trucks came next. Third place was taken by Out of the Blue Puruvian Fusion. They showcased unique flavors of tropical Peru using locally grown ingredients. Second place (for the second year in a row) was given to Blue Smoke BBQ, an obvious favorite as the crowd went wild.  First prize went to the new kids on the block, Kabobby McGee’s. They’ve only been open for one month, and they showcased delicious Mediterranean cuisine with homemade pita and slow roasted lamb. After receiving their blown-up grand prize of $1,000, they high-tailed it back to the food truck to keep the hungry fans happy.

With the announcements out of the way, the festival shifted its focus to the stage. Floating Action, led by artistic genius and multi-instrumentalist Seth Kauffman, brought a low-fi dub psychedelic rock sound that had fans on their feet. With the perfect combination of jam and composure, they graced fans with a well-rounded set of old and new songs. Starting with “Well Hidden,” the band took off into fan favorites like “Seized,” “So Vapor,” “Don’t Stop Loving Me Now,” and “To Connect.” They ended the set with the very jammy “Cinder Cone,” leaving the crowd begging for more. Sharing music labels with Dr. Dog and Jim James (My Morning Jacket), Floating Action are sure to be a household name amongst the musical community in the coming years.

As the sun began to set, the pure food fans began to head home, and the pure music fans flocked to the stage to catch Nashville country star Nikki Lane. With a voice and style reminiscent of Wanda Jackson and Allison Krause, she rocked the whole country vibe, decked out in cowgirl boots and hat. Her songs expressed hardcore emotions of love and hate, as well as addressing the country’s current political problems, which Lane said deserved a big old “middle finger.”  After blowing the crowd away with her hit single “Right Time,” she invited her mother on stage for another special moment of the festival.  Together they shared vocals on a Bob Dylan cover, “You Ain’t Going Nowhere,” and the whole crowd sang along.

Before headliners Dr. Dog took stage, fans had a quick break to refuel and grab one last bite from their favorite trucks. A surprise movie showing happened in the barn during this break. Brevard, surrounded by Pisgah National Forest, has become a hub for outdoor sports, especially mountain biking. Earlier that day they filmed a mountain bike race, and with just enough time to edit, festival goers got the first look at the exclusive film.

Dr. Dog brings a fan club with them wherever they go. Their songs show off the talents of every band member, even passing their instruments around, giving the entire show a diverse sound. Kicking off with fan favorite, “Shadow People,” they quickly had the crowd wrapped around their fingers. The set continued with songs that expanded across their entire discography, from a soulful “Too Weak To Ramble,” to a bluesy “Lonesome.” For their encore, the band did something completely unexpected. Fans minds were blown when the band asked if there were any guitarists out there that wanted to play. After some sorting they invited a guy on stage to jam. He crushed the solo for “Heart it Races,” giving the band’s guitarist a chance to sit back and enjoy. They gave thanks to the festival, Oskar Blues, the fans, and one of their favorite bands of the night, Floating Action. 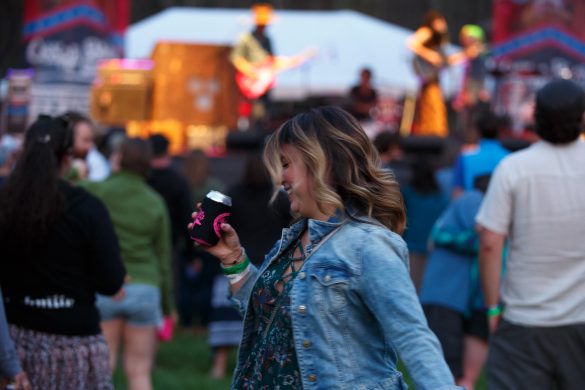 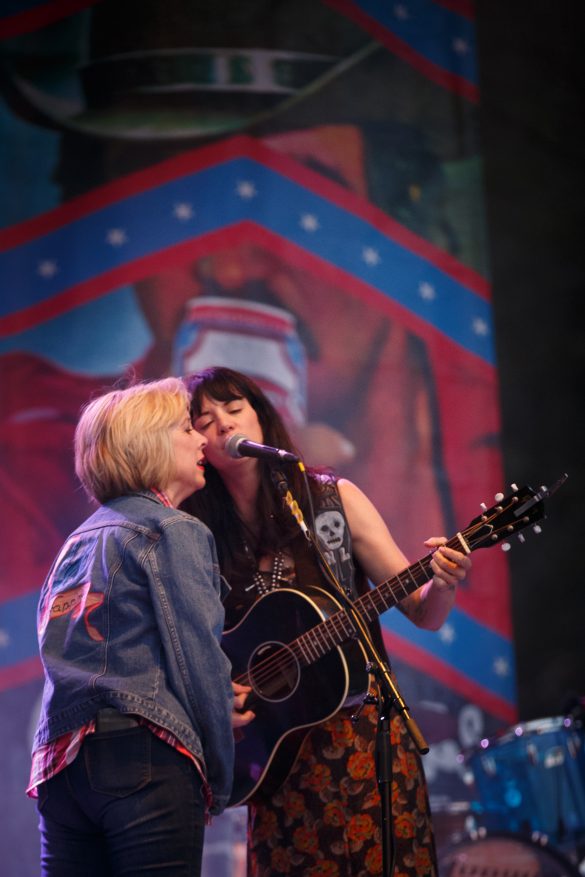 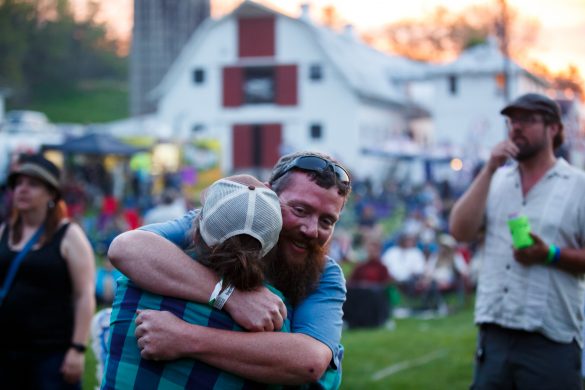 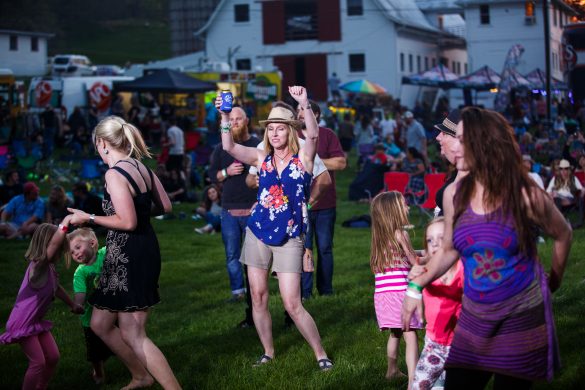 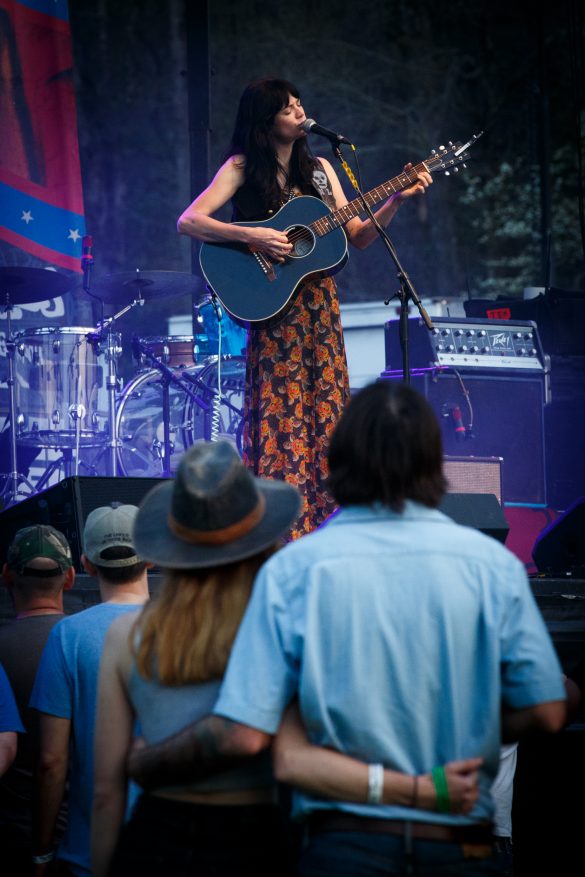 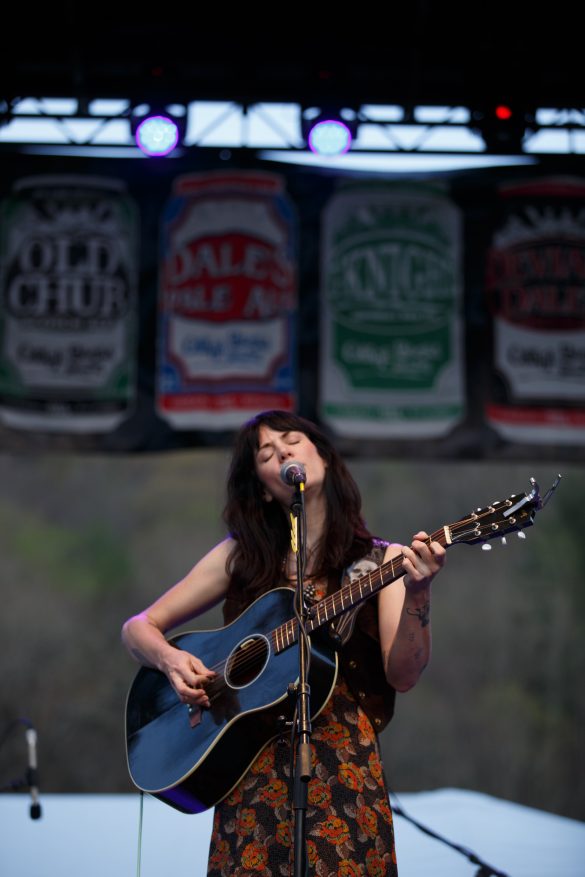 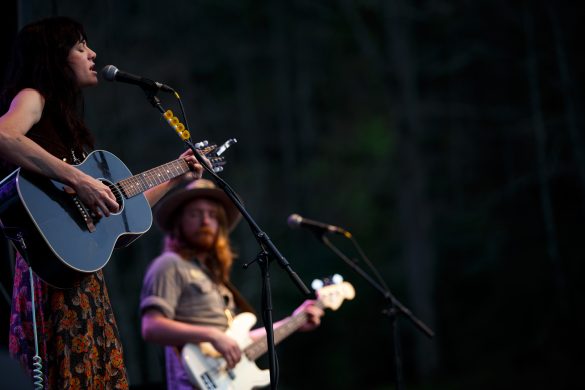 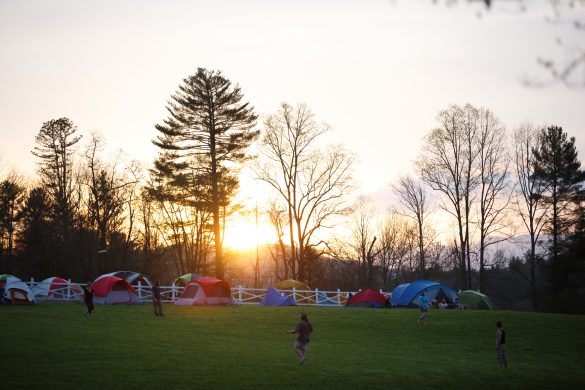 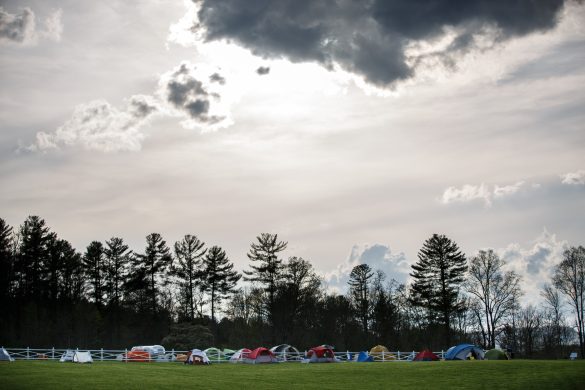 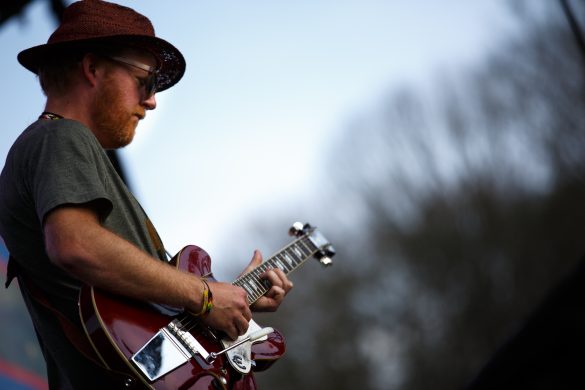 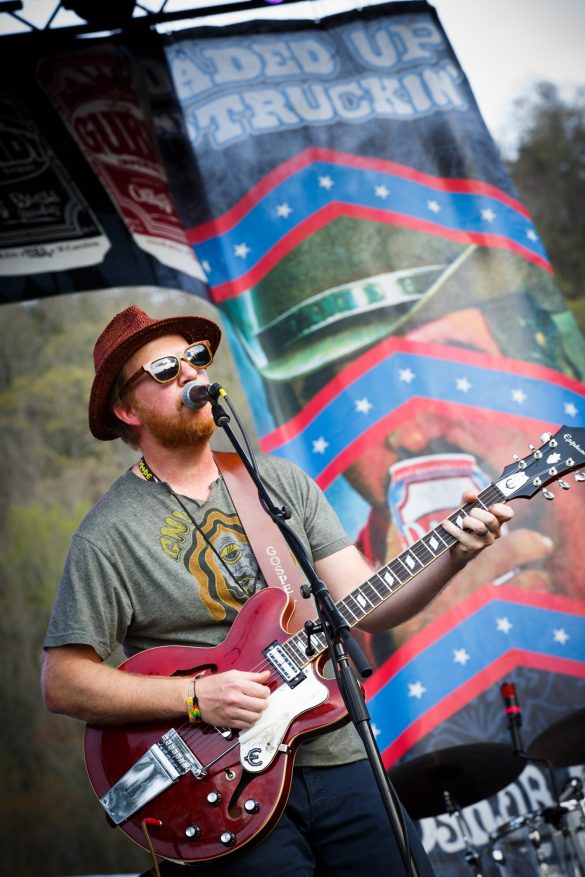 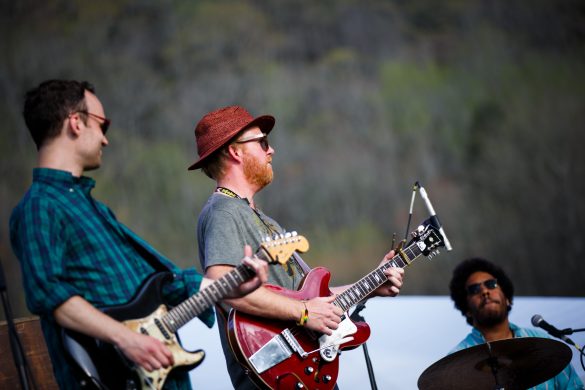 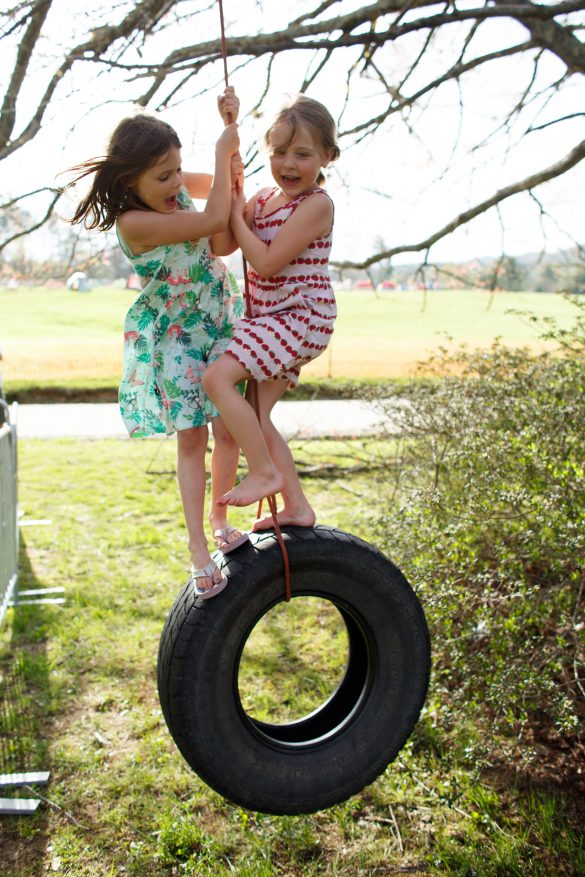 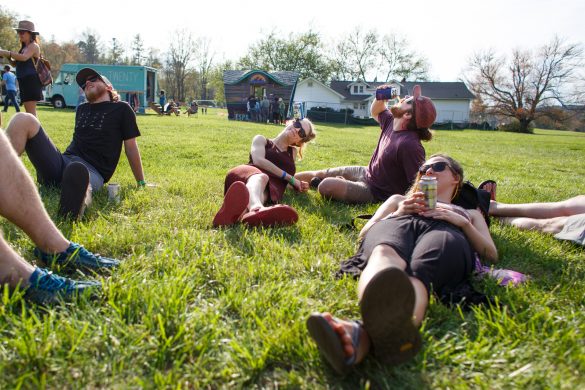 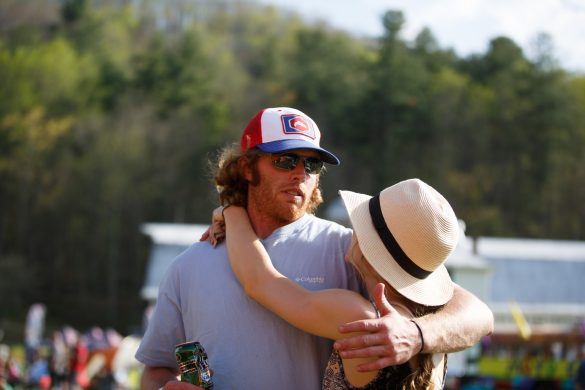 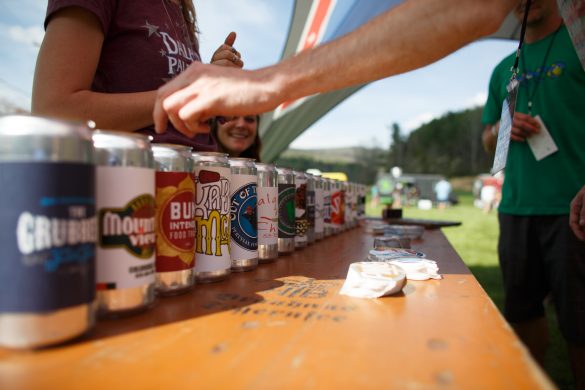 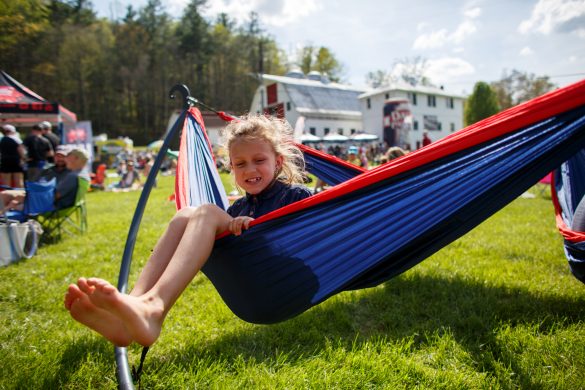 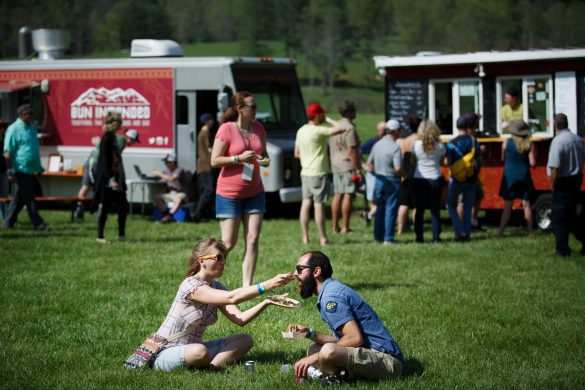 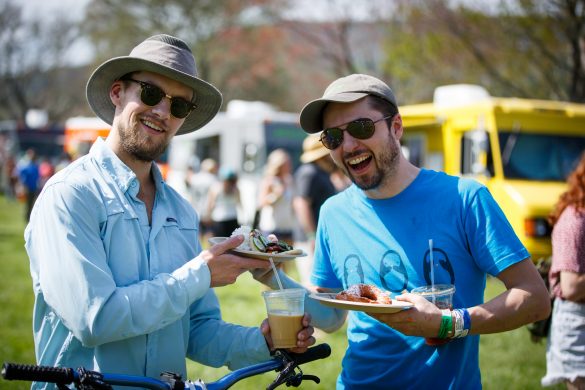 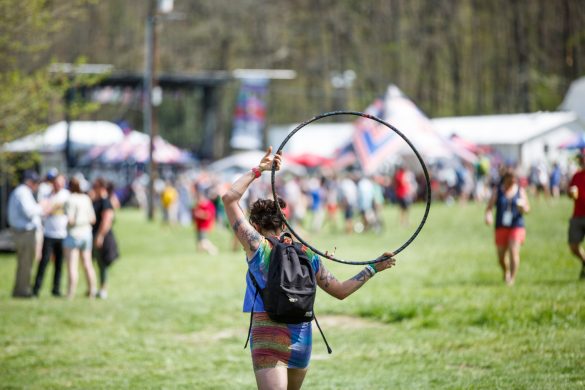 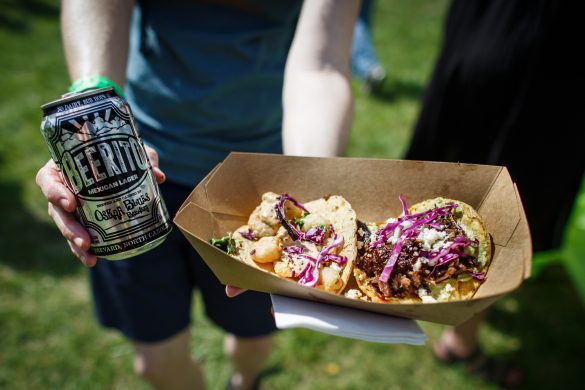 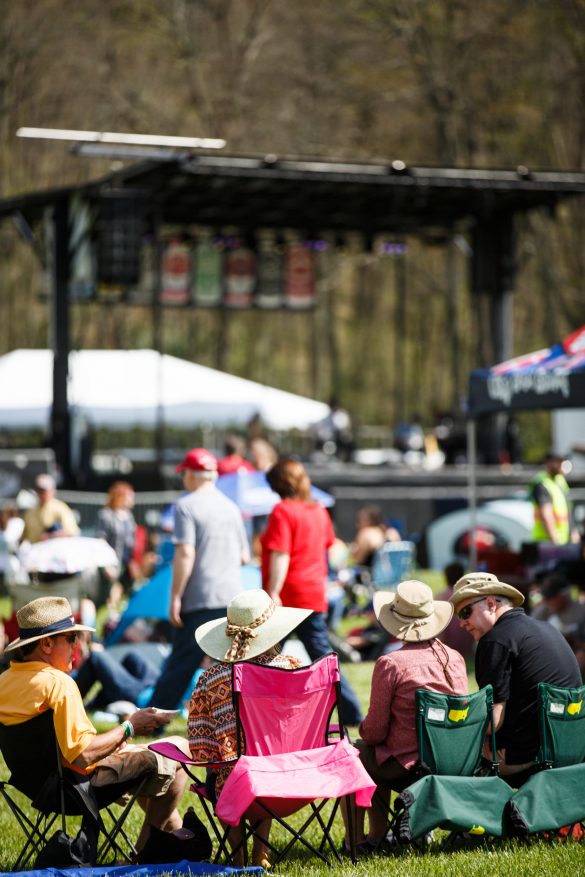