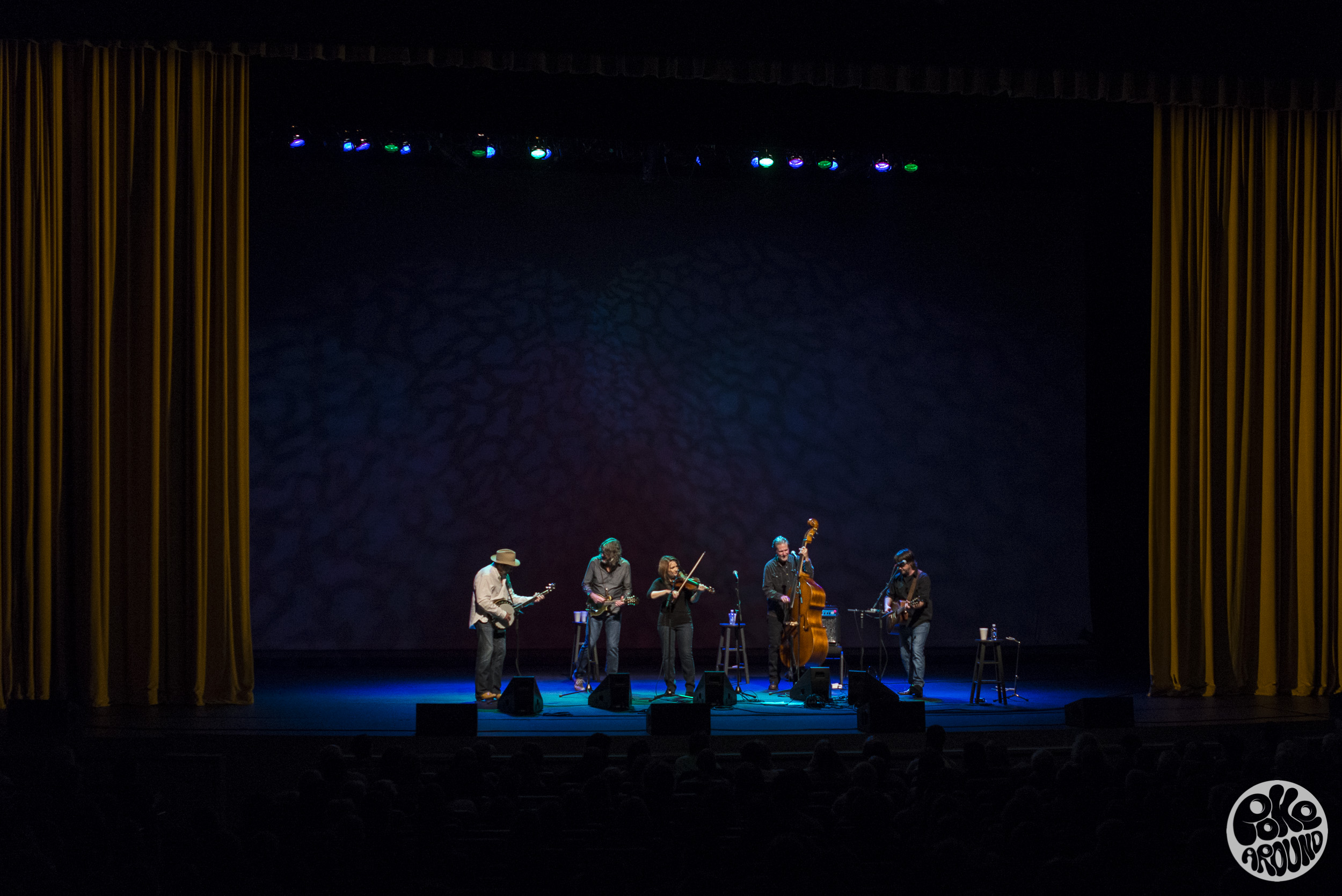 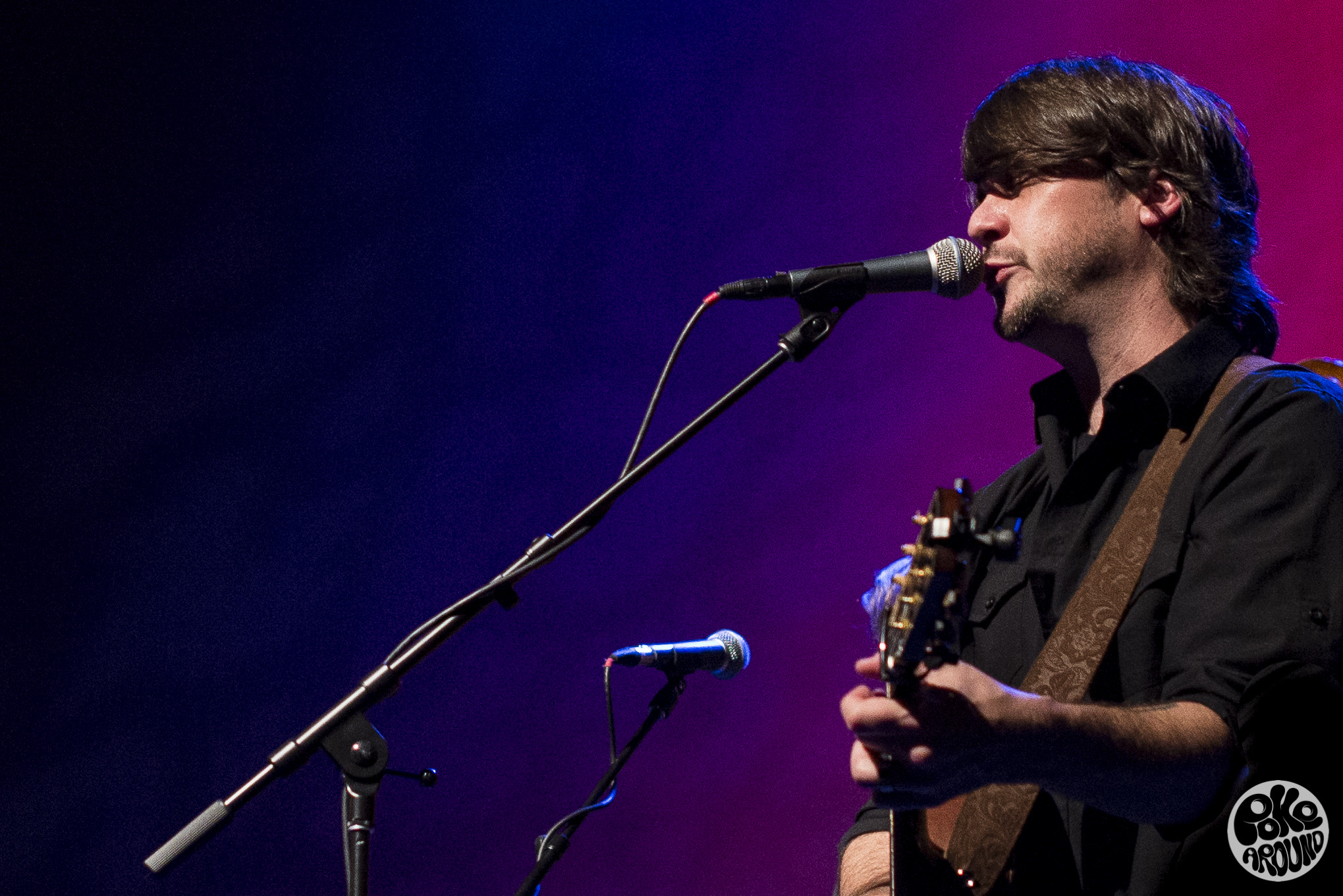 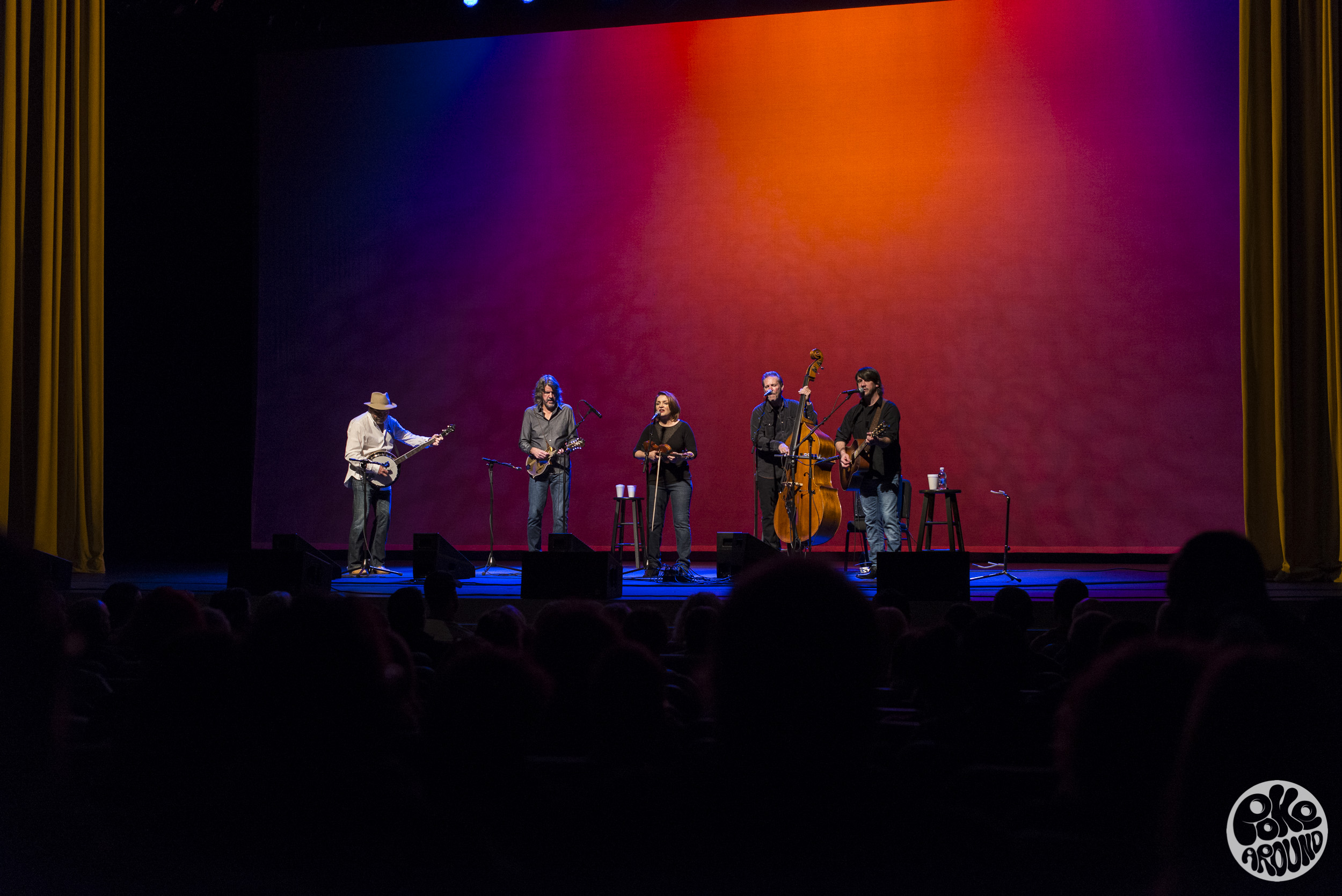 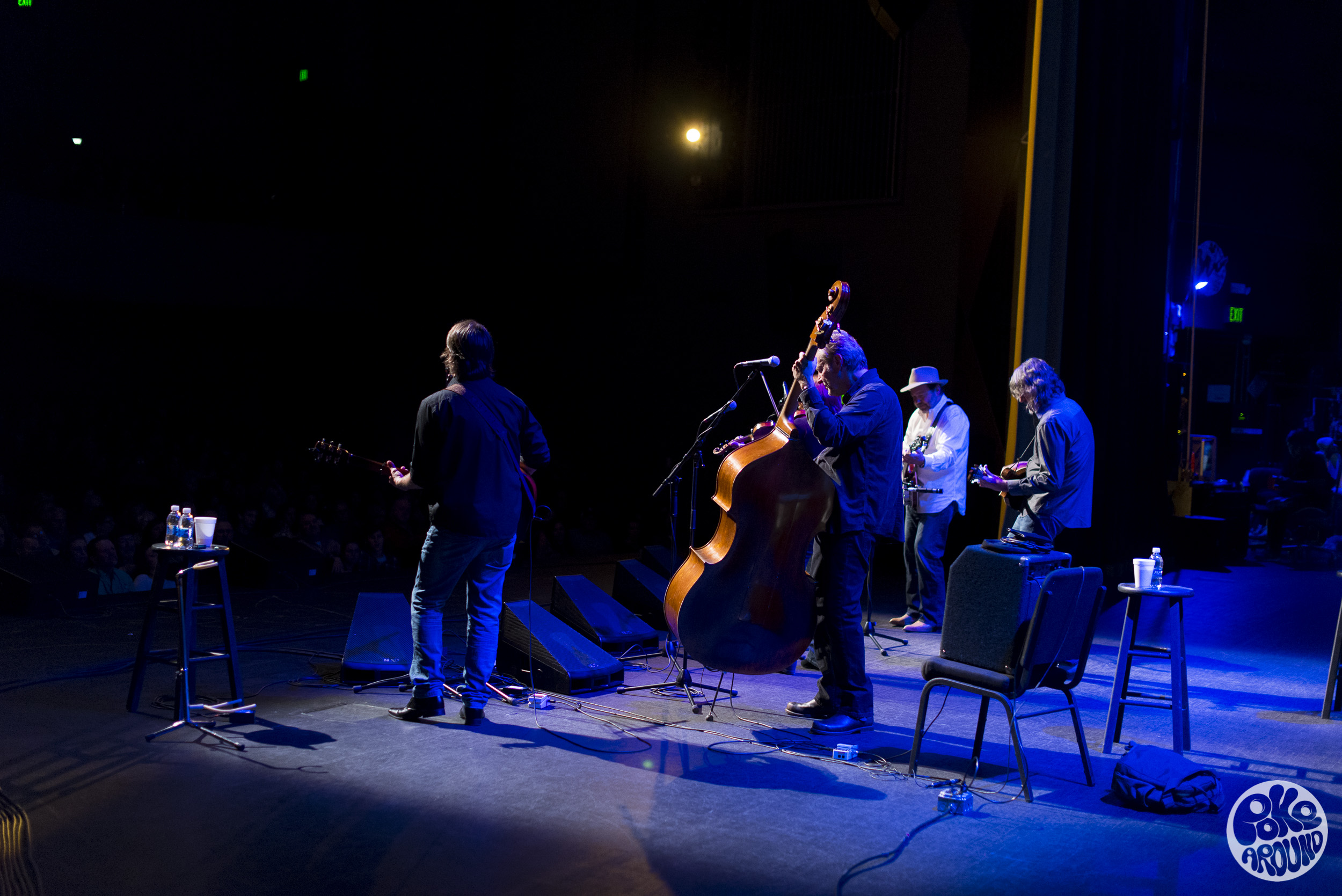 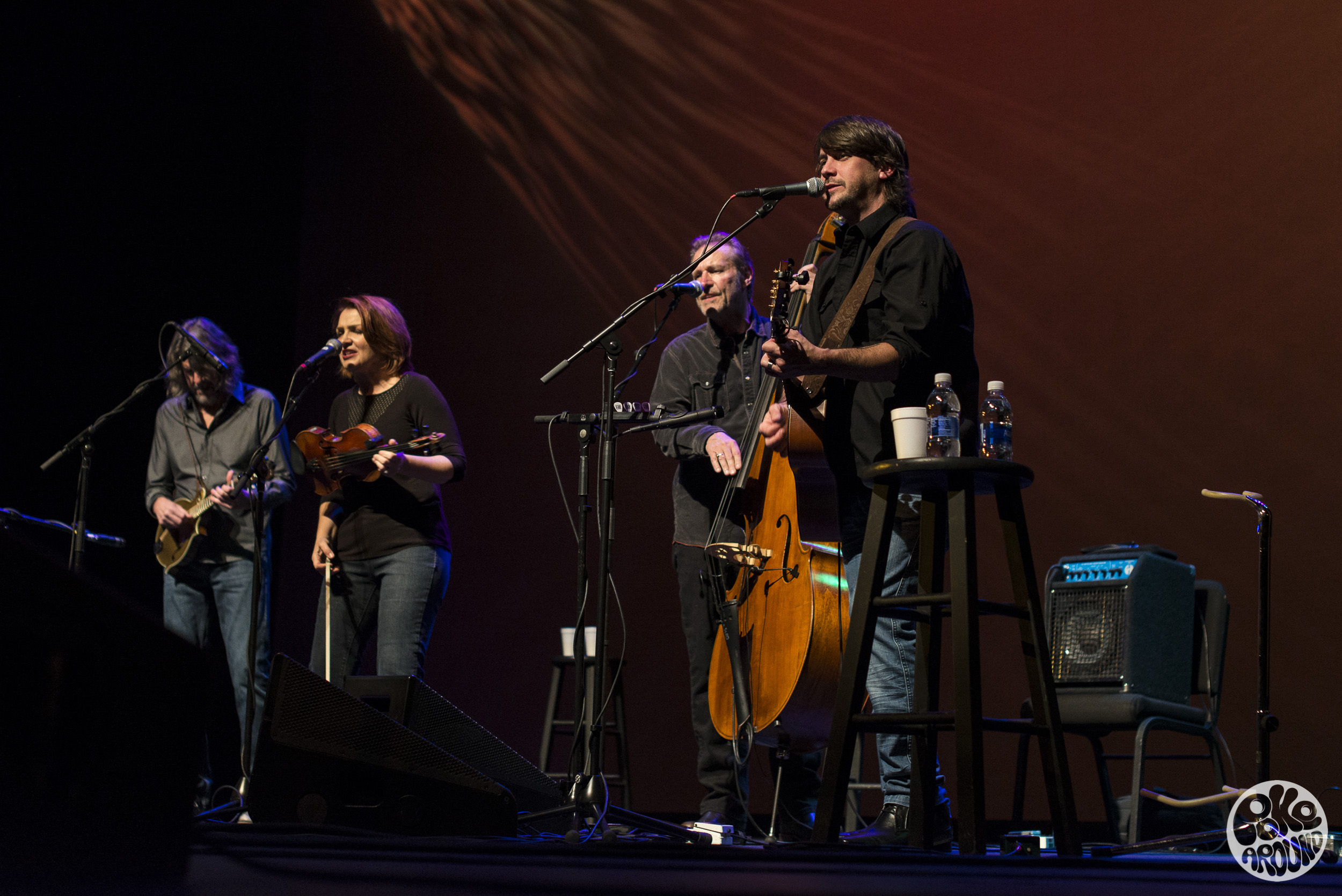 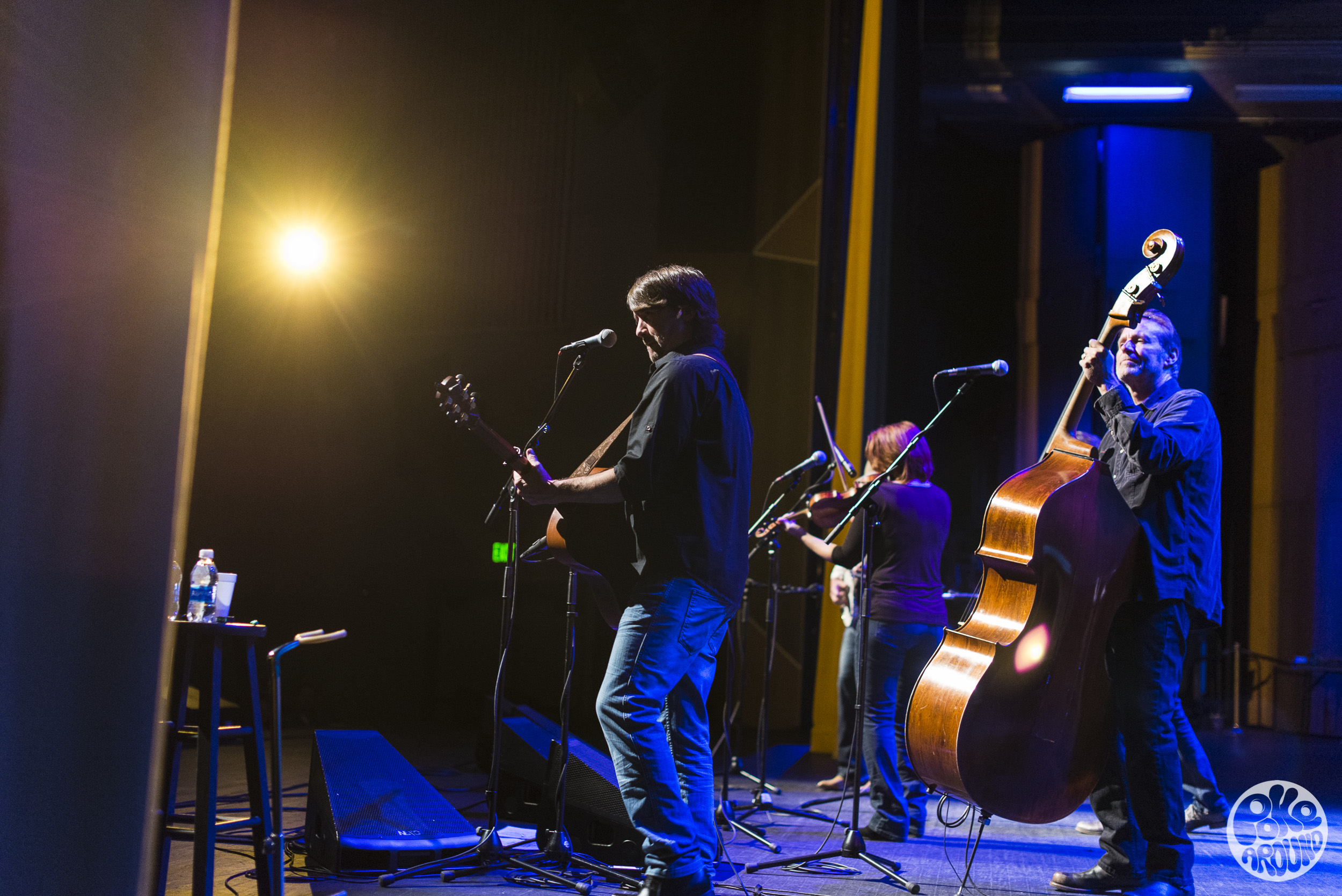 On the tail end of a very busy fall tour, The SteelDrivers made their way to the Schaefer Center for the Performing Arts in Boone, North Carolina last Friday. The Nashville based quintet played much of the new material from The Muscle Shoals Recordings, which took home the Grammy Award for Best Bluegrass Album last year. They also tapped into some of their older catalog from the Chris Stapleton days, and treated the crowd to some cherished covers, including The Allman Brothers’ “Midnight Rider.” Before the show, The Poke Around’s Richard Oakley sat down with fiddle player Tammy Rogers to get a closer look at how The SteelDrivers got where they are, and what’s next.

How did you get your start playing fiddle?

My dad was a musician, and he enrolled me in the school orchestra program when I was in fifth grade. I really had no desire to play the fiddle or the violin at that point, but once we went to the music store and got the violin and came home, I very quickly fell in love with it.

Could you name some of your biggest influences, both personally and as a band?

Personally, Emmy Lou Harris has to be way up there at the top of the list. I probably listened to her more in my teen years than anybody. Although I did listen to a lot of Ricky Skaggs, Tony Rice, J.D. Crowe, those types of guys that were really active in the mid 70s and early 80s. Bobby Hicks, as far as a fiddle player, was a really big influence. Although I did buy a record from this guy Scotty Stoneman, he had long since passed, and he was a huge influence personally as far as my fiddle playing.

As a band, we have all kind of come up through the ranks playing a lot of different styles of music, so I would say anything with a lot of soul, a lot of blues. I mean Richard is from Memphis, so he grew up in that world. Gary obviously still lives in Muscle Shoals so he comes from that world of soul and R&B music, and then listened to Wilson Pickett a lot and those kinds of folks. Mike Fleming grew up in Missouri playing clawhammer banjo so he had a lot of string band types of music that he listened to, but then he quickly got into bluegrass in college, and then played the electric bass with country bands here in Nashville for a long time. Brent went kind of the same way. He grew up playing bluegrass and then moved to Nashville and did the country touring thing for a long time with Holly Dunn and Sweethearts of the Rodeo. So we’ve all done a lot of different types of things.

How does the band’s songwriting process find a balance between the different sounds you all bring to the table?

Well I think that’s one of the things that sets the band apart, since we’ve all played all these different styles of music. Speaking personally, when I write a song, I’m just sitting down to try to write the best song and to tell the story the best I can, not thinking, ‘oh this needs to be bluegrass or this needs to be country’. I just want it to be a great song. Then it’s kind of up to the band when I bring in the song, for us to sit down and see if we can come up with an arrangement that works for these five people.

Can you speak to the ever-changing landscape of stringed music in America?

I think it’s phenomenal, it’s been a tremendous resurgence in the last five to ten years, It’s been great.

Any up-and-comers that stick out to you?

Myself and the band, we’ve loved Della Mae. I think what they’ve done mixing old-time and bluegrass has been great, and certainly as a platform for an all-female lineup, they’re phenomenal. Their singing and playing is top notch. I just love what they do, they’re definitely one that I immediately think of kind of in that world. Gillian Welch has been another one that has done some really great things throughout her whole career. Usually when she’s got a new record out she doesn’t tour chronically, but when she does go out she’s always going to do something great. The Lone Bellow, which is more from the Americana world than bluegrass world, but as far as modern string bands go, I think they’ve done some really interesting things. I really like their singing a lot.

Outside of The SteelDrivers, who are some of your favorite musicians that you have played with, and is there anyone on your wish list?

I’m very proud of all the work I got to do with Buddy Miller through the years. He’s definitely a favorite in the recording world. I played on a bunch of his records, so that would definitely be a highlight for me. I’ve gotten to do some gigs with Emmy Lou (Harris), though I haven’t gotten to play on any of her records per say.

I could shoot really far up there and say Dolly Parton. I played on a TV show for her about eight years ago or so, and I was so awestruck I couldn’t even say a word. Her presence is just amazing. I love her pop music and country music, but the bluegrass recordings, the acoustic music recordings that she’s done in the past ten years or so have been phenomenal.

There is definitely a rich bluegrass tradition in Boone and Western North Carolina, how do you feel about playing in this area?

We did one festival up there a few years ago (Blue Bear Mountain Music Festival), and the scenery was just stunning. We play a good bit through North Carolina, usually several times a year. North Carolina is really good for us, we have several markets here that we try to get through at least once or twice a year. Personally, I love Boone. I’ve been through there many times and it is one of my favorite towns.

How did your recent Grammy Award inspire you going forward? What’s next for The SteelDrivers?

Well it is really, really inspiring, especially for a band at our level. I don’t know that winning another Grammy is that helpful to someone like Beyonce who has ten of them or however many she’s won, and her tours are so huge. I don’t know that (someone of that level of fame) can feel the impact of it, but for us it was absolutely huge. We immediately saw the impact of it. The phones started ringing that day, seriously, our booking agent let us know that day that he was already being contacted from all directions. So our fall has been the busiest fall we’ve ever had. I want to say this weekend out on the road is our 15th or 16th in a row. This weekend kind of wraps up the year for us, we have one tiny little date in December but that pretty much wraps us up. It has been incredible, a lot of wonderful shows, so it definitely has increased our visibility and viability as a touring act, and (established us as) an act that’s going to sell tickets and bring people out. It’s really been incredible to see that change. I can remember as a kid watching the Grammys with my eyes wide open, sitting around just being in awe of the musicians. I hope the Grammys still carry as much weight as I thought it did growing up. It was like winning an olympic medal, like winning the World Series! It really feels like the crown jewel of your career to have that fall into place. And we had been nominated three times before that and had not won, so to get that close and not bring home the hardware – obviously, like they say it’s nice to be nominated and it’s an honor, but boy, there is a huge difference between the nomination and actually winning, I will say that.

Did this come with any feeling of responsibility to carry the torch for the bluegrass world?

I didn’t really take it as such. We do have kind of an interesting spot or position in the bluegrass world, because I think in the greater musical world people see us as bluegrass, but within the very traditional bluegrass world we’re not really looked upon that way at all, we’re kind of outsiders. So I didn’t necessarily feel like a responsibility to be a torchbearer or anything like that, just more honored that we were recognized for our music, and I think I would feel that way whether they had put us in Americana, bluegrass, folk  or whatever category. I really dislike labels, as you can probably tell from speaking to me for 20 minutes. You know, I just love music and to me, there are two kinds of music. There’s good and there’s bad, music that I respond to and music that I don’t, and I listen to anything that moves me and says something to me emotionally.

What’s next for The SteelDrivers?

Since day one, The Steeldrivers have been about creating their own sound and writing great songs, and that hasn’t changed. So that is what’s up ahead, were looking to make the next record and hopefully we have a fairly light early spring. So that’s definitely in the plans, to get in the studio kind of during that first quarter. I’ve been writing and Gary’s been writing, and our process is that we send songs around to each other and we all listen, and once we get in the same room and say ‘hey lets try this one,’ then we’ll just start working them up and hopefully we’ll be ready with a new batch of songs to go in that first quarter. We still are very committed to writing our own material, still having another full length album of all original songs that originate within the band. A pretty tall order, but that’s the way we’ve always done it and I know we’re still committed to doing that.

[…] This article was originally published on The Poke Around, with photographs courtesy of Jameson […]