Campers left the 9th annual DelFest with mud on their feet and grins on their faces, all feeling a little bit closer to one another after stomping, hugging and screaming “Del Yeah!” together over a rowdy and unforgettable Memorial Day Weekend.

Patriarch Del McCoury and his litter of musical offspring extended their arms to welcome the finest musicians and most gracious fans in bluegrass to their extraordinary family reunion at Allegany County Fairgrounds in Cumberland, Maryland. The good times commenced on Thursday with the haunting harmonies of Elephant Revival and then The Wood Brothers preceding Yonder Mountain String Band’s intricate performance on the main stage. The Infamous Stringdusters really brought the heat to the Music Hall for their late night performance, enlisting the help of Nicki Bluhm and members of Fruition on scorching covers of “Sittin’ on Top of the World”, The Band’s “Up on Cripple Creek”, and an epic rendition of The Grateful Dead’s “Not Fade Away” to finish. 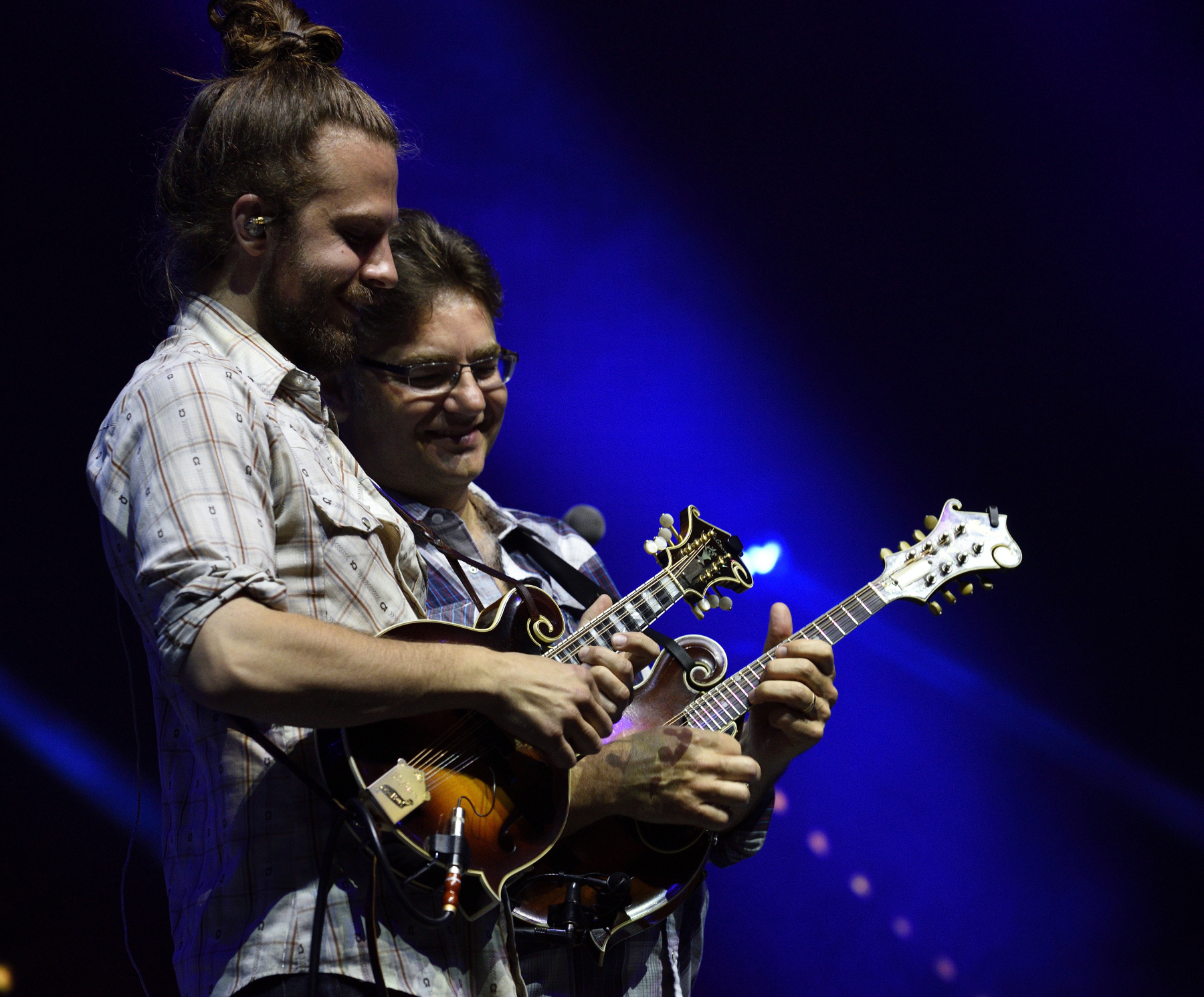 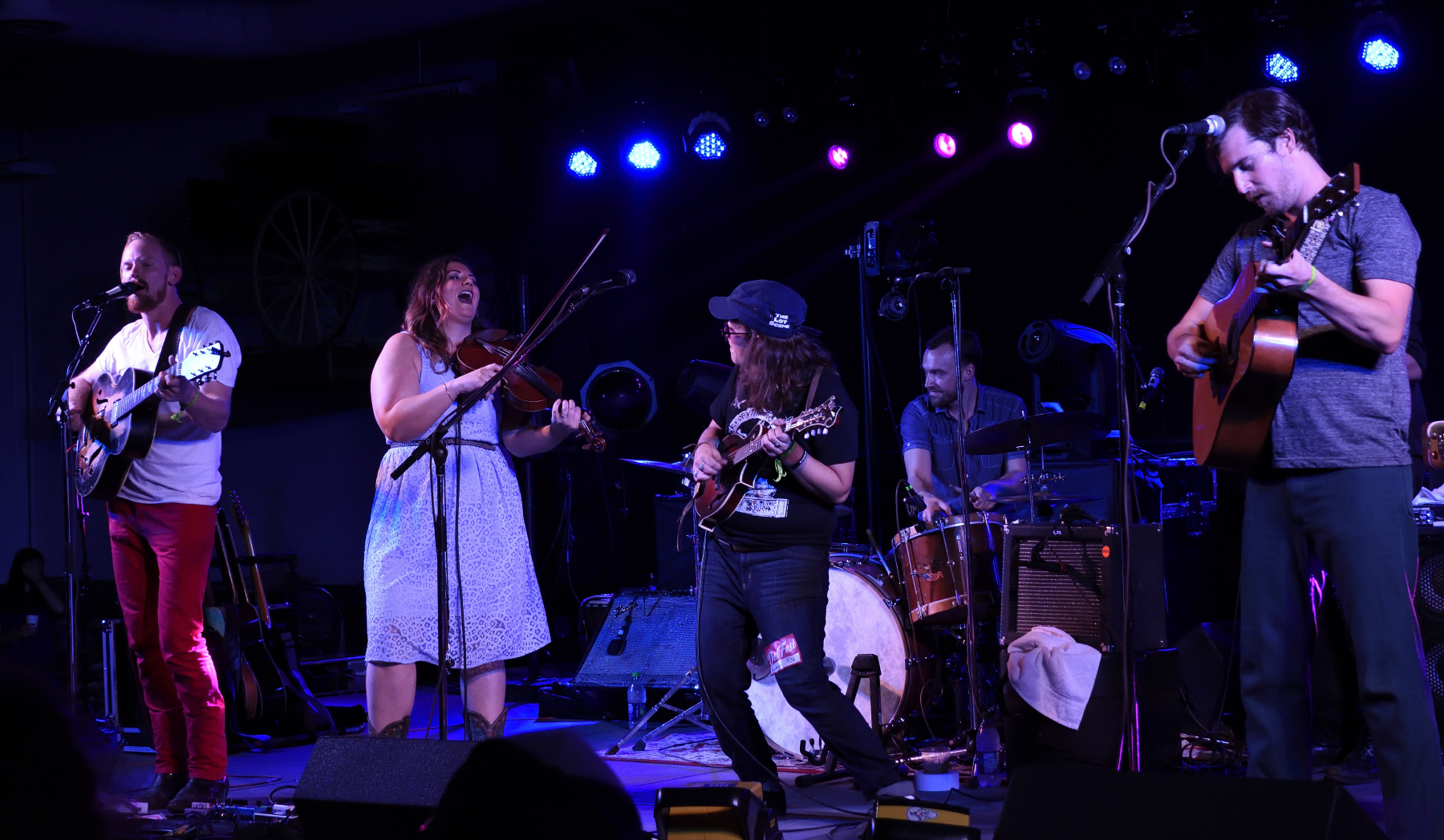 Friday was highlighted by special daytime performances from Mipso, The Lil’ Smokies, Fruition and Sierra Hull, who all got the energy feeling right for the monumental night ahead. The Stringdusters and Nicki Bluhm played another amazing set full of fan favorites such as “Big River” and “Let It Go” to start off Friday night’s festivities.

Fans of all ages then rolled out the proverbial red carpet to welcome Del McCoury for his first scheduled performance of the weekend. The Del McCoury Band consists of sons Ronnie and Rob, on mandolin and banjo respectively, Jason Carter on fiddle, Alan Bartram on bass and Cody Kilby on guitar. A completely attentive crowd listened as the first family of bluegrass cracked jokes and picked on the classics, including “Sweet Appalachia” and “Dark Hollow”.

Making their first-ever appearance at DelFest, Tedeschi Trucks Band combined the vigorous blues guitar of Derek Trucks with the potent voice of his wife Susan Tedeschi, as well as their eclectic 12-piece ensemble to bring some satisfying soul to the bluegrass mecca. 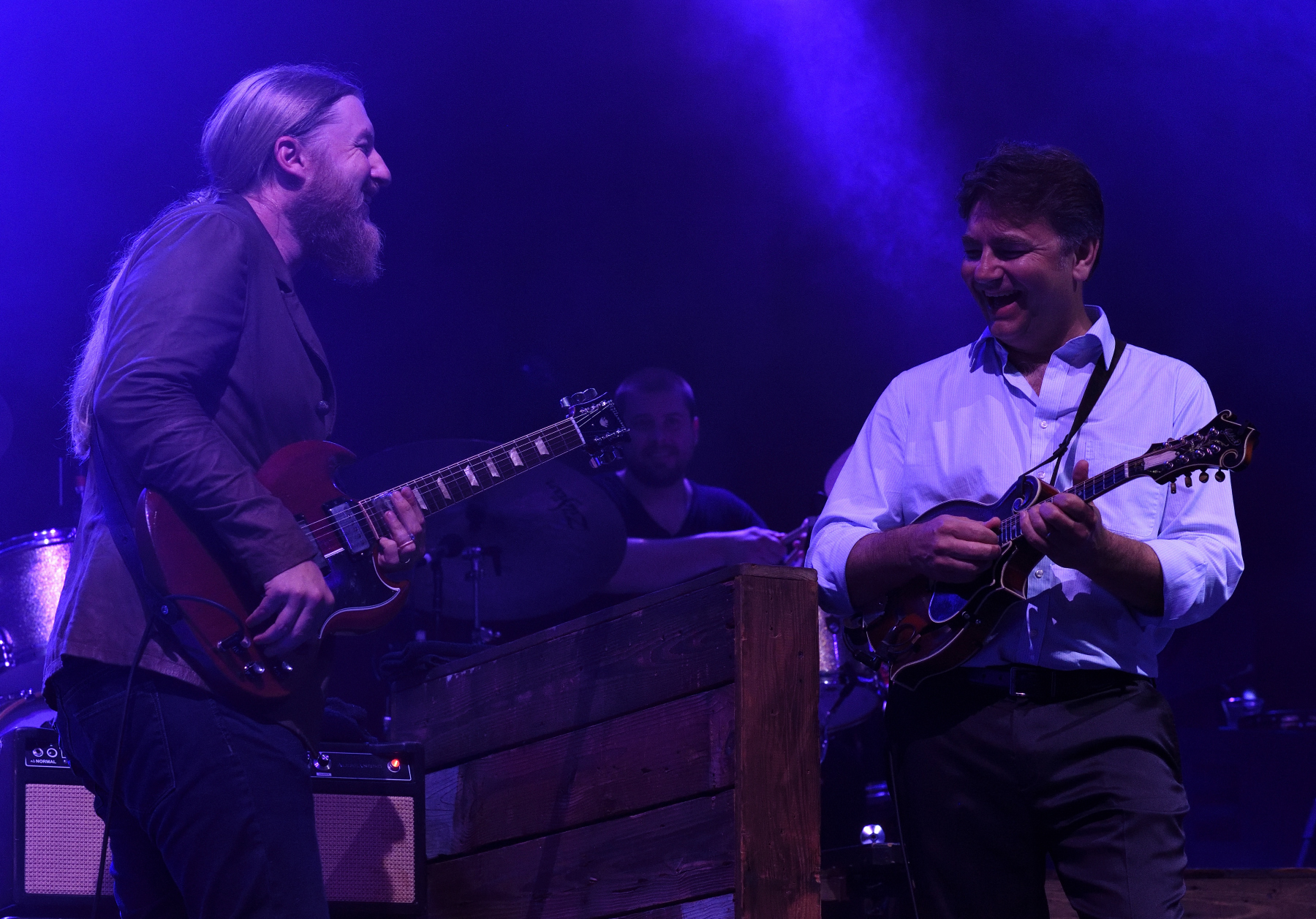 Dustbowl Revival and The Brothers Comatose were the popular sets to fill the day on Saturday, with The Broomestix packing in the crowd for their exuberant flavor of R&B and funk. This troupe of teenagers out of Nashville has been turning heads all over the country, and they even have an unsuspecting McCoury in the fold, Del’s 18-year-old grandson, Evan. Sam Bush Band always brings friends and family together to celebrate life with invigorating mandolin jams backed by a world class band. This performance included the tear-jerking “Circles Around Me” as well as “Roll On Buddy, Roll On” with the help of Del himself. Fans were treated to a terrific set by Bruce Hornsby & The Noisemakers, highlighted by “Jacob’s Ladder” with the addition of fiddle player Mark O’Connor.

Railroad Earth has played at all but one DelFest, so they knew exactly how to work the adoring crowd set out before them. The power cut out on them during a mesmerizing interpretation of Paul Simon’s “America,” but that didn’t slow them down, as they brought out Sierra Hull to close with a “Bird in a House” that was absolutely phenomenal.

The Travelin’ McCourys came out to show everyone how to have some fun, opening with “Cumberland Blues” and bringing out Mark O’Connor, Sierra Hull, and their hilarious father for plenty of the set, including “Homegrown Tomatoes” and a ripping cover of John Hartford’s “Vamp in the Middle” to end the evening.

Cabinet and then Greensky Bluegrass came into the festival playing their initial sets in the Music Hall late Saturday night, and they made one hell of an entrance. With the only sold-out late night show leading up to the weekend, these two skyrocketing groups expressed their respective twists on bluegrass to a packed house of die-hard fans. The rambunctious energy of Cabinet served to build the fever for the highly anticipated Greensky show, which ran the gamut of their growing catalog, including “Kerosene,” “Windshield” and “Dustbowl Overture” with a lively cover of “China Cat Sunflower” thrown in the mix. 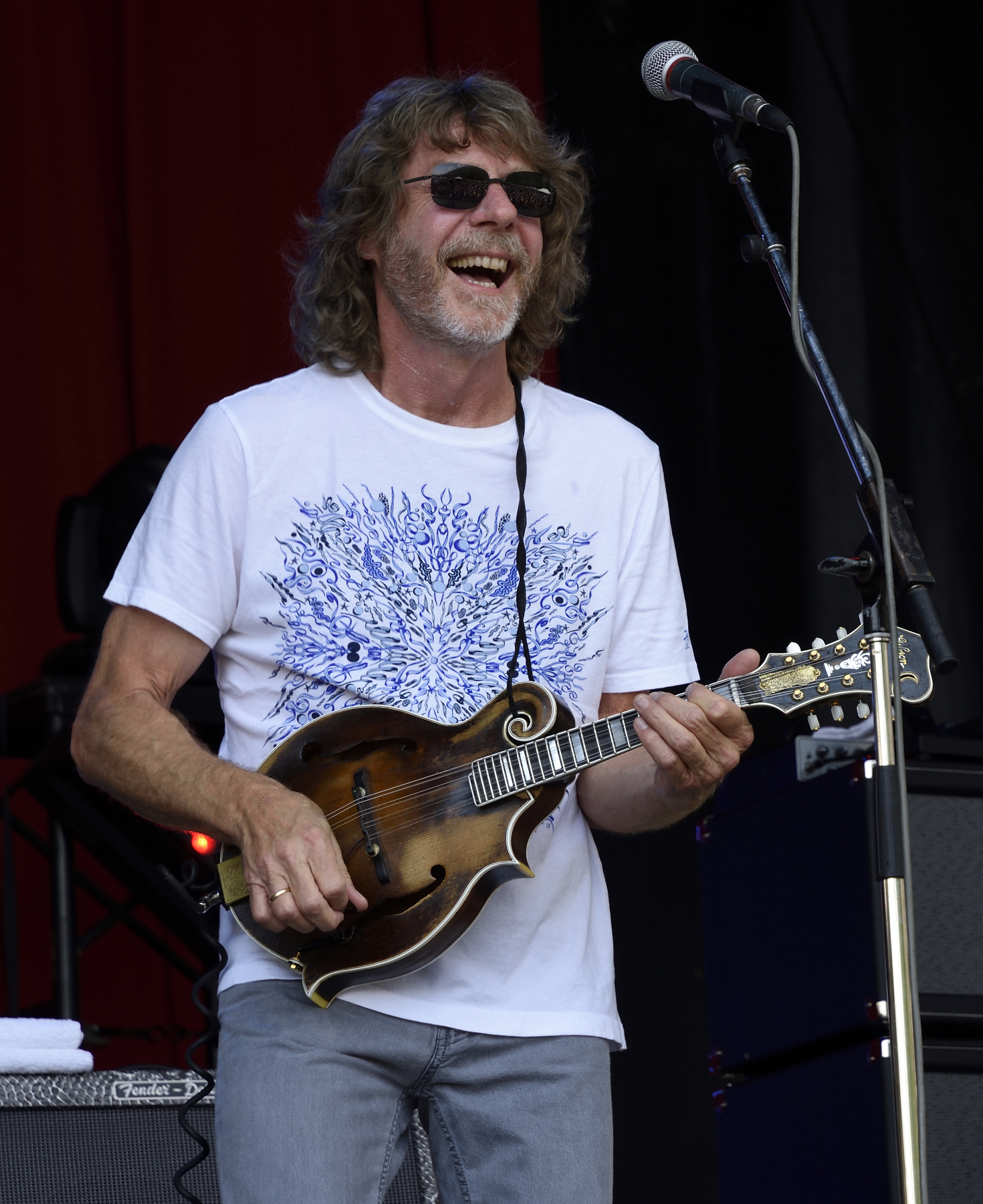 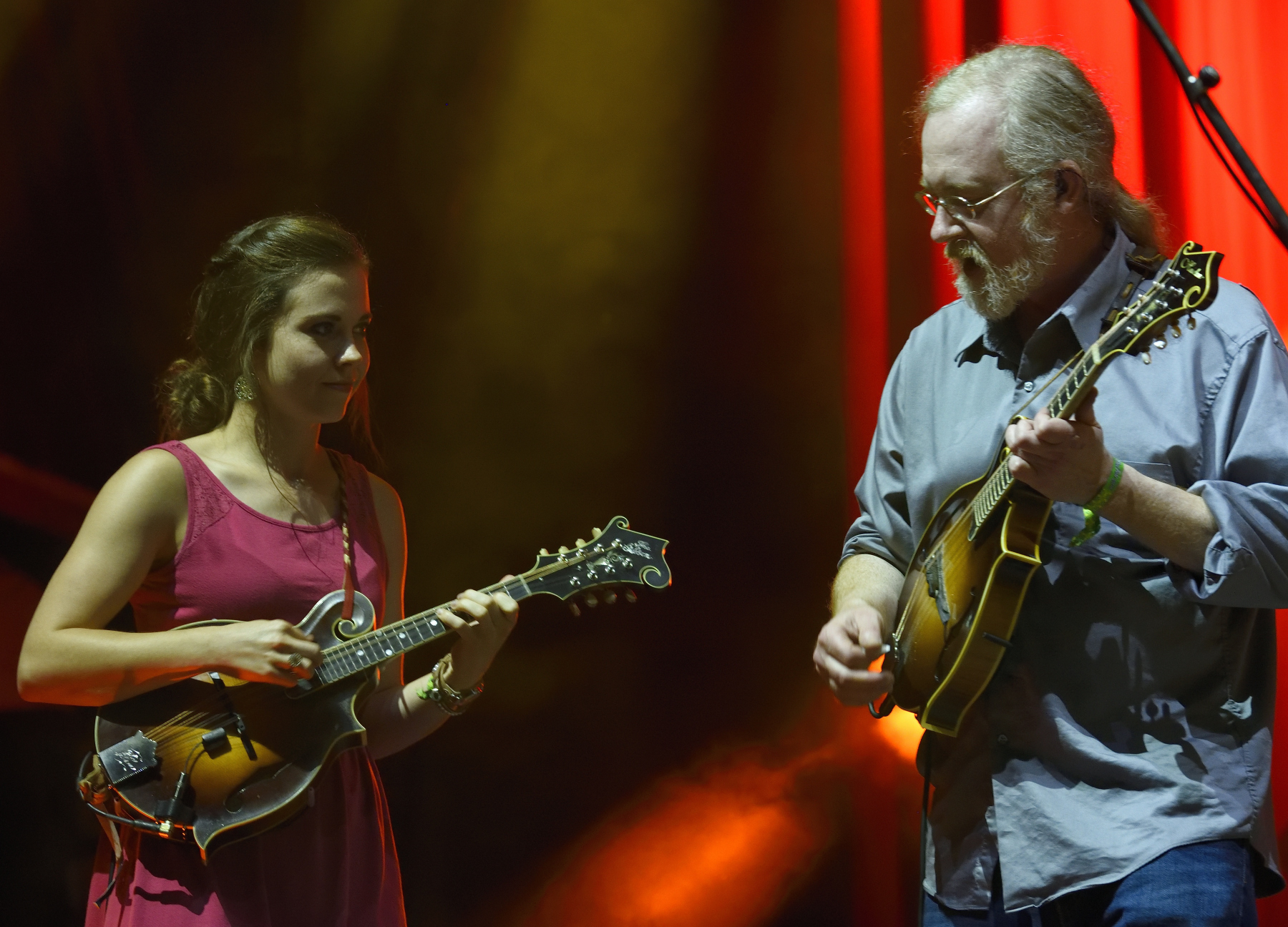 Sunday got off on a special foot with The McCoury Brothers in the Music Hall, featuring Del’s older and younger brothers, G.C. and Jerry playing with the rest of the band. This is always regarded as a “can’t miss” event by fans, and this year’s performance was a truly intimate showcase of multiple generations of the McCoury family playing timeless bluegrass standards. Keller Williams held down the main stage in true singular fashion, running through his usual panorama of animated originals and funked up covers, including an especially impressive “Best Feeling” and the frenetic “Hula Hoop To Da Loop.”

The generational thread continued to be celebrated during The Del McCoury Band’s final set of the weekend. After recently recording an album of unfinished Woody Guthrie tunes, Del decided to bring up Guthrie’s grandson Cody to play dobro on a couple of his Grandfather’s resurrected songs. Later in the show, Ronnie’s son Evan came out on stage to help the family celebrate the fourth birthday of Robbie’s son Vassar, playing a (tiny) bass with his legendary household.

Greensky Bluegrass started playing DelFest in 2010 as one of the smallest names on the bill. In 2016 they closed out the main stage on Sunday after The Del McCoury Band. This was a huge moment for them, and it was plain to the eyes and ears that they did not take it lightly. In the way that Greensky does best, they played a stirring and emotional set straight from the heart, highlighted by their original “Demons” segued into Bruce Springsteen’s “Dancin’ in the Dark.” Other special moments came in the form of “Yellow Eyes” penned by Rayland Baxter, and their own “Leap Year”, all culminating in an impassioned encore of “Atlantic City.”

The final late night set of the weekend couldn’t be more appropriately billed, with a Sunday send-off courtesy of none other than The Travelin McCourys, featuring Keller Williams. Having recorded an album and played countless shows together, the love these artists have for each other was very apparent, and it was a perfect way to end the family oriented weekend. They ripped through old bluegrass heirlooms as well as some of their own (future) newgrass classics, memorably playing “Bumper Sticker,” a song they all recorded with Del as an ode to bluegrass heroes from all generations.

Like a centuries’ worth of sculptors pulling from the same pool of clay, the artists at DelFest showed us again and again that strings really are the ties that bind us. From Jeremy Garrett throwing sparks on his 104-year-old fiddle to four-year-old Vassar McCoury breaking hearts on a 4-foot tall bass, the magic of stringed instruments has spanned generations and genres, providing gifts to us all. Joe Craven summed it up best when he said, “Music makes the old feel young, and gives the young the courage to grow old.”

Until next year, Del Yeah!