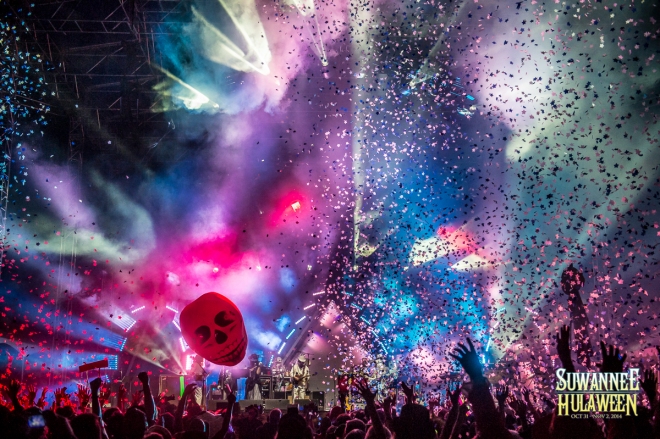 One of the few advantages of being too old to trick or treat on Halloween is being able to experience the abundance of exceptional live music our region has to offer. The Poke Around has you covered this year, highlighting the trickiest of musical treats from up and down the East Coast.

Umphrey’s McGee is hosting their 7th annual Monster Mash Halloween Bash at The House of Blues in Boston. The mash-up masters are sure to knock fans expectations straight into the Boston Harbor, playing on October 31st and November 1st, with Dopapod opening on the first night.

Moe. is bringing a special treat to the new Fillmore Philadelphia on October 30th and 31st. The jam icons will be welcoming Cabinet on the 30th, and playing their first ever Star Wars themed show on the 31st. May the force be with you Philadelphia.

The New York City area should be feeling very grateful this Halloween, with 5 shows featuring incarnations of the Grateful Dead.

At Madison Square Garden on the 31st and 1st, Dead and Company will play two sold out shows with the highly anticipated line up of Bob Weir, Bill Kreutzmann, Mickey Hart, John Mayer, Oteil Burbridge, and Jeff Chimenti.

Just a short train ride away, Phil Lesh and Friends will be playing a three night run at the remarkable Capitol Theatre in Port Chester, New York from October 30th to November 1st. Very recently announcing a bladder cancer diagnosis, Lesh refuses to slow down, this time enlisting the help of Stanley Jordan, John Kadlecik, Jason Crosby, and Tony Leone.

Pigeons Playing Ping Pong will hit the 9:30 Club in Washington, DC on October 30th. This is the second date of their Halloween theme, Dead Zeppelin: Moby Dick’s Picks.

Local favorites Trongone are keeping with the beautifully recurring Grateful Dead theme at The Camel in Richmond, Virginia. They will play a set of originals followed by a “Dead as Funk” set on October 31st.

Asheville natives The Broadcast, with special guests Urban Soil, will be playing The Pour House in Raleigh on October 30th.

Night two of Dead Zeppelin brings Pigeons Playing Ping Pong to The Lincoln Theatre on October 31st, alongside Big Something for another night of raging Dead and Zeppelin tunes.

Joe Russo’s Almost Dead has changed the game when it comes to interpreting The Grateful Dead, selling out all over the place in 2015 and turning every set they’ve touched to a fun and exciting brand of the Dead’s music. Featuring Joe Russo, Marco Benevento, Tom Hamilton, Dave Dreiwitz and Scott Metzger, this eclectic band is sure to blow the doors off of The Ritz on October 31st.

For live electronica fans, it doesn’t get much better than Papadosio. The explorative quintet is playing The Orange Peel on October 31st.

Widespread Panic will make a glorious return to Asheville with two shows at the US Cellular Center on October 30th and 31st. Panic will most certainly bring the heat to celebrate Halloween, a weekend that they continuously crush year after year. The boys have a well-known love for Asheville, even recording their most recent album “Street Dogs” in the city last winter. This will be their first trip back to the US Cellular Center since 2013 for Warren Haynes’ Christmas Jam, where they laid down an unforgettable set that lasted until almost 5 a.m. These shows sold out very quickly, so expect a packed house full of some of the rowdiest fans in rock ‘n’ roll.

The Mantras are coming to Charlotte for a show at The Rabbit Hole on October 31st. They will most definitely get into some of their more evil, spooky jams to celebrate Halloween, with a few likely “Talking Dead” mash ups left over from last Halloween and their Mantrabash set with Bernie Worrell. These guys have been on fire lately, and always come out to play on Halloween.

The historic beach city of Charleston has big plans in store for this Halloween. Joe Russo’s Almost Dead (mentioned above) plans to bring their high energy and enthusiastic interpretation of the Grateful Dead to The Music Farm on Friday night.

One of the foremost titans of the east coast jam scene, Perpetual Groove is slated for an epic two night run at The Charleston Pour House on Friday and Saturday. This is P-Groove’s first time playing in Charleston since Fall of 2012, and their die-hard fan base is sure to turn out in full force.

String Cheese Incident is once again returning to Spirit of Suwannee Music Park in Live Oak, Florida to host Hulaween 2015. This is hyped as the largest and most extravagant Hulaween to date, with a killer line up and hundreds of interactive art installations throughout one of the most scenic festival sites in the nation. In addition to seven sets of the String Cheese Incident, fans will have the chance to catch Pretty Lights, Primus, Chance The Rapper & The Social Experiment, STS9, Odesza, Slightly Stoopid, GriZ, Lettuce, Railroad Earth, Papadosio, The Floozies, The Polish Ambassador, Sam Bush Band, The New Mastersounds, Dopapod, Elephant Revival, Shook Twins and many more amazing acts. The main events will take place from Friday to Sunday, with a thursday pre-party featuring Joe Russo’s Almost Dead, with Dumpstaphunk and EOTO in support.